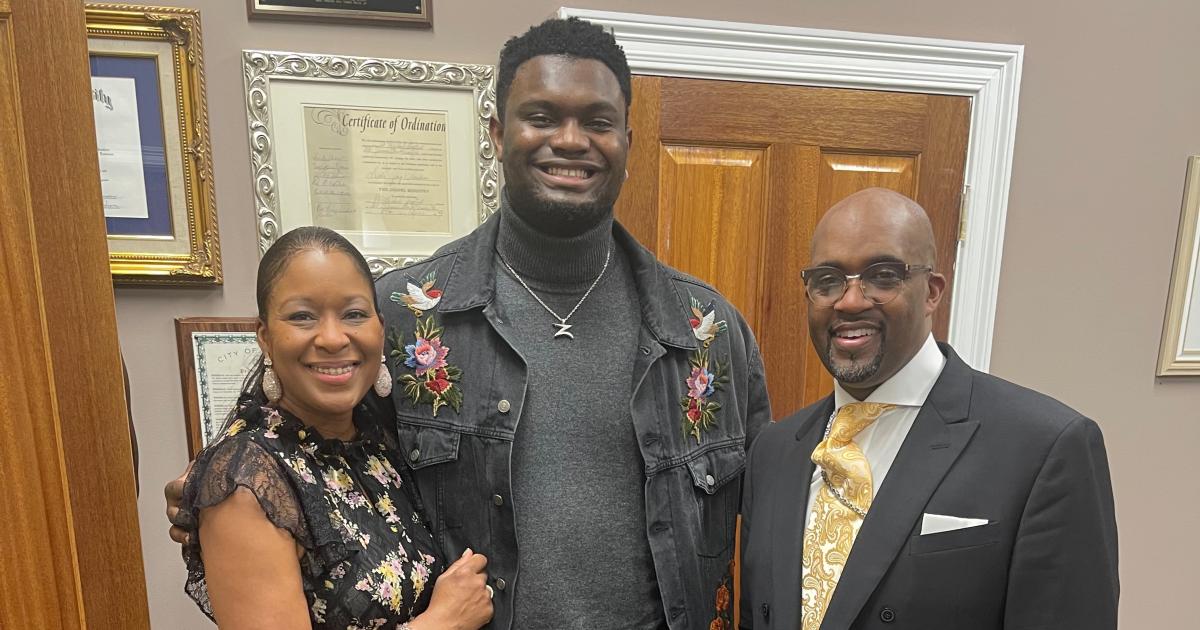 NEW ORLEANS — On March 6 at 8 a.m., several hundred congregants filed into Fifth African Baptist Church to hear pastor Dale Sanders give his weekly sermon in what he has called his “church in the hood.” Among them was a 6-6 giant sitting near the church’s rear.

Sanders had no idea that Zion Williamson and his family would be attending his services that week. But he made the realization quickly as to what was going on.

“I am a basketball fan. I knew who he was when he walked in the door. Of course, some persons who were in the rear of the church noticed him also. You can’t not,” Sanders laughed as he spoke to The Sporting News.

MORE: Is LeBron James the greatest scorer of all time? Debating the case

The Williamsons stayed for the entirety of the sermon. Sanders was covering Psalms 51 that week, which spoke of God’s forgiveness.

“[Zion’s stepfather] told me that it impacted [Zion] because of the fact that he had talked about it with him personally during his maturing years, growing up. It resonated with him,” Sanders said.

Perhaps that idea of forgiveness was on Williamson’s mind as he tried to rehabilitate his image. He is not expected to return to the court this season, per Shams Charania of The Athletic, and he’d been facing heavy criticism for being distant from the team. Former teammate JJ Redick lambasted Williamson on ESPN’s “First Take” for not texting new teammate CJ McCollum, bringing his situation to the forefront of the national news scene.

“[Not reaching out to CJ McCollum] just shows a complete lack of investment in your team, in the organization, in the city,” Redick said. “I get that he’s hurt and away from the team [rehabilitating in Portland], but you just traded for one of the 50 best players in the league, a guy that’s supposed to be paired with you. Reach out and say hello.”

Williamson and McCollum did eventually connect shortly after Redick’s critique, and Williamson seems to be showing that he is invested in the city. At least, he was with the members of Fifth Baptist.

Williamson met with Sanders in his office after the sermon. Sanders disputed the notion that Williamson seemed moody or uninterested in the New Orleans community.

“I think he’s in great spirits because I literally had to have one of my deacons pull him out of the crowd. They didn’t want to let him go, and he didn’t want to let them go. He took a lot of pictures and talked with a lot of people. He didn’t seem to be in any way, shape or form distant. He’s ready to do what he came here to do, is what it appeared to me.”

Sanders was concerned that the Williamson family would continue to be mobbed upon leaving his office and offered the family a private exit. Williamson’s response?

“He said absolutely not. He wanted to be around the people,” Sanders said. “I only saw later after my second service, I saw pictures surfacing that he was outside after the service talking to people. He was in very good spirits.”

Williamson continued to take photos and talk to the congregation for what Sanders guessed was at least another 20 or 30 minutes before going on with the rest of his day.

Although Williamson may not play in any games this season, he has recently rejoined the team. He could be seen waving to fans and interacting with them during home games. He has also been doing light work in practices. Sanders believes that when Zion does come back, he will be happy to continue playing in New Orleans.

“To be honest with you, [Zion’s] exact words to me were that he loved the city,” Sanders said. “The only thing I know from him personally is that he’s excited about being back and he wants to get back into the saddle as fast as he physically can.”