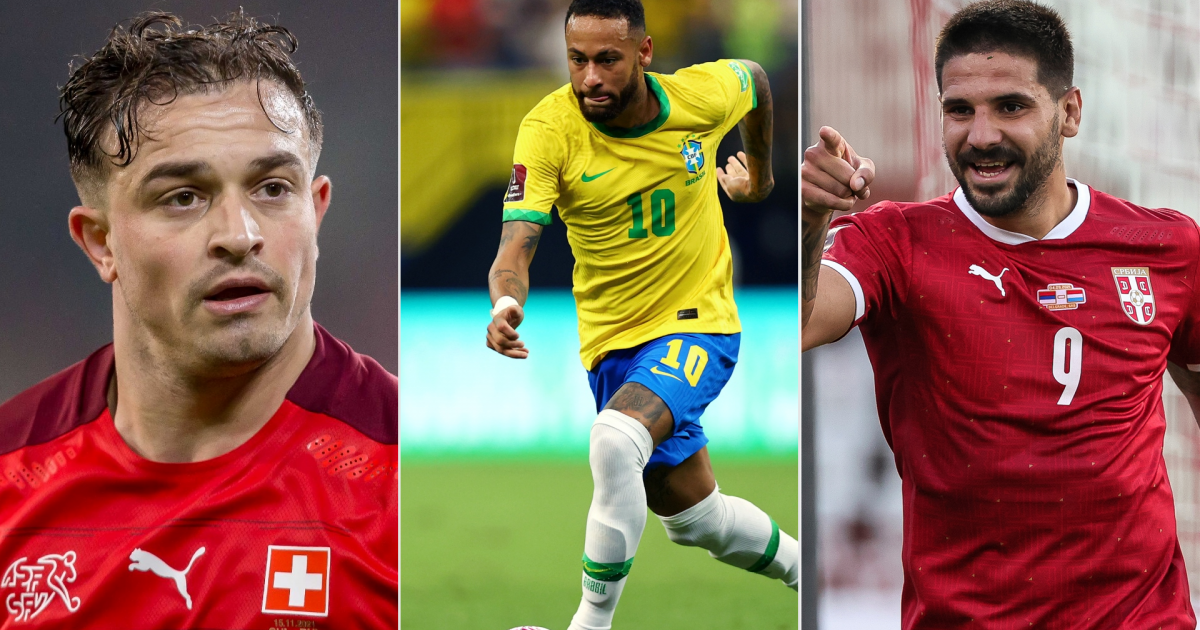 Neymar’s Brazil will be strongly fancied to advance to the knockout stages, but they will face stiff competition from the two European sides, who both finished above so-called superior teams in Portugal and Italy to qualify for the finals automatically.

Cameroon will bring experience and energy following their playoff win against Algeria to qualify for the World Cup.

Brazil will be the projected winners of the pool, with the other three teams predicted to be battling it out for that second qualifying spot and a passage into the knockout stages.

For the two teams that advance from Group G, they would match up with a team from Group H in the Round of 16.

The four teams selected into the group will play a round-robin format with each nation facing the other three. Group standings are based on points from those three group-stage matches — three points for a win, one for a draw, none for a loss.

The top two teams from each group based on total points advance to the single-game knockouts. If teams are tied on points, goal difference is the first tiebreaker followed by goals scored. If teams are also tied in those categories another set of tiebreakers is applied.

It just would not feel like a World Cup without Brazil and the Selecao will aim to end two decades of European dominance on the biggest stage since their fifth success back in 2002.

Argentina might have beaten their old rivals in last year’s Copa America final, but Brazil still feels to many people like the team most likely to wrest back control of the World Cup for South America.

Angel Di Maria’s solitary strike at the Maracana in July accounted for Brazil’s only defeat in 2021 — one of only five goals they conceded. Their hopes are likely to stand and fall by how effectively their attacking talents click, with an onus on Neymar to finally enjoy a World Cup befitting of his talents alongside Real Madrid sensation Vinicius Jr.

Serbia failed to make it to Euro 2020 but secured a place at the 2022 World Cup in Qatar by finishing top, and unbeaten, in a tough qualifying group which also included Portugal. Indeed, it was a late win against Cristiano Ronaldo and company in November that saw the Balkan nation book a place in the draw automatically.

The creativity and flair of experienced Dusan Tadic will likely pose problems for their group opponents, while there are also other useful attacking options in Aleksandar Mitrovic and Luka Jovic. If they play with cohesion then they could end up surprising many people.

Switzerland finished World Cup qualification with a flourish, beating Bulgaria 4-0 at home back in November to underline their place at the top of Group C as they booked an automatic spot in Qatar.

Going unbeaten during qualifying, with only two goals conceded, Murat Yakin’s team are certainly ones to watch when the tournament proper gets underway — with a side built strongly from the back but that is also capable of unlocking the opposition.

World Cup veterans Cameroon booked a return to the finals for the first time since 2014 with a dramatic aggregate winner-take-all victory over Algeria in late March.

The Indomitable Lions will be making an eighth appearance on the World Cup stage and can call on many well-established players who could be key contributors in Qatar. Vincent Aboubakar and Eric Maxim Choupo-Moting are both seasoned international performers, who will be expected to deliver.

Cameroon’s best placing in the tournament came with an iconic quarterfinal run at Italy 1990 and charismatic coach Rigobert Song — a player in his younger years with Liverpool who made four World Cup appearances of his own — will believe his team have a chance of reaching the knockout phase once again following a third-place finish at the Africa Cup of Nations.

Shortly after the World Cup Draw, sportsbooks are expected to hang group odds for each team to advance from the group stage.

The first-place and second-place finishers in Group G will move on to the Round of 16 and will face off against the two teams to advance from Group H on Monday, Dec. 5, and Tuesday, Dec. 6.

The official FIFA 2022 World Cup match schedule outlines the following knockout pairings for the Round of 16 through to the final:

World Cup Round of 16