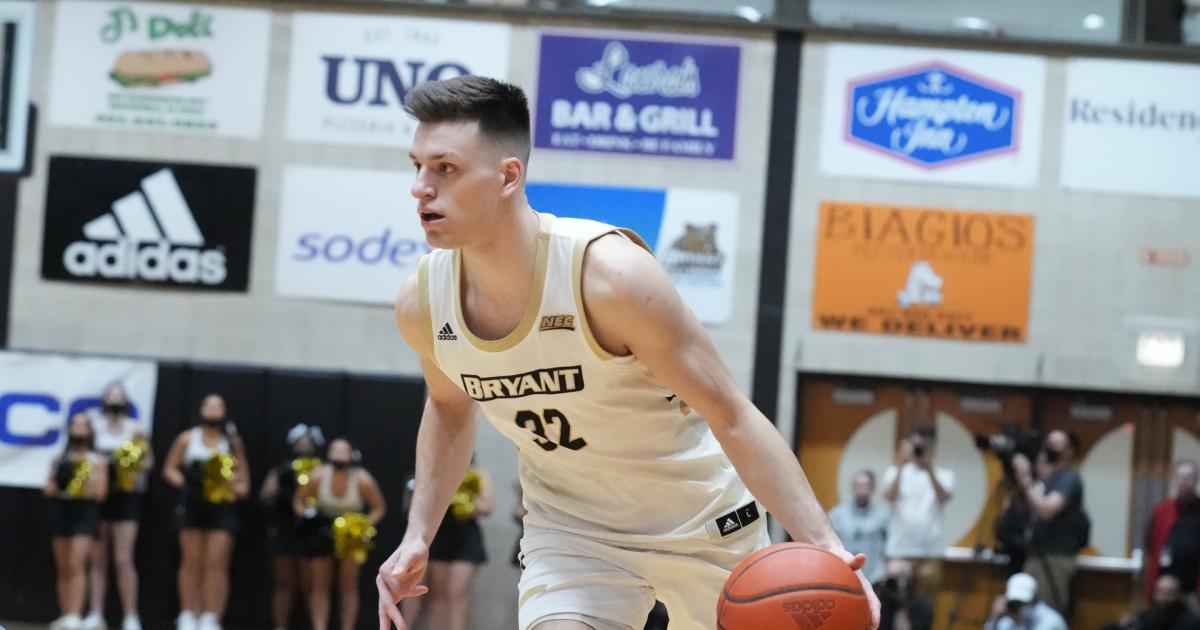 March Madness is commonly a stage in which college basketball, at large, becomes aware of previously unknown players, whether that be because of impressive play or larger-than-life personalities.

So it will be when Bryant faces off against Wright State with the 16-seed on the line in Wednesday’s First Four matchup. Bulldogs redshirt senior Peter Kiss will make sure of it.

For those who have never heard of Kiss — perhaps unsurprising, considering his team plays out of the Northeast Conference — he is not only the nation’s premier scorers, but also one of its most prolific trash-talkers.

The Sporting News has everything you need to know about Kiss ahead of Wednesday’s game against Wright State:

Who is Peter Kiss?

Kiss is the nation’s leading scorer at 25.1 points per game. Per a report from the Associated Press, he also leads the nation with 10 games of 30-plus points. That includes 34 in the NEC title game vs. Wagner to secure a First Four bid. He also enjoyed a stretch of 10 consecutive games from Jan. 17 through Feb. 24 with 25-plus points. He averages 5.8 rebounds and 3.3 assists per game for the Bulldogs.

Kiss, a New York native who played one season at Quinnipiac and three seasons at Rutgers before transferring to Bryant in 2020-21, isn’t just quietly ripping teams apart with his scoring prowess. He has stared down opponents, argued with officials, done pushups on the baseline, jawed at opposing players and student sections, hung from rims, held up three fingers following 3-pointers and more.

The 2022 NEC Tournament showcased how Kiss can get under opponents’ skin:

Per The Providence Journal (Providence, R.I.), Kiss missed the Bulldogs’ opening two games this season for a violation of team rules — something the publication reported was the result of a “minor infraction.”

The AP also noted how Kiss was suspended a game by the NEC following a game against Long Island — against whom he scored 30 points on 9-of-18 shooting — that featured 12 combined technical fouls and four ejections between Bryant and LIU. The Bulldogs matched that suspension, per team policy.

That said, Kiss’ high school coach Ryan Hurd said his persona off the court is far removed from the one he displays on it:

The great part about Peter Kiss is that he’s as nice as they come off the court. Probably be a great baby-sitter. You just have to make sure your kid doesn’t start talking sh*t and challenging him to 1v1 games in the yard. That might be a problem!! https://t.co/Lwi7F0ALo2

He is averaging 25.1 points, 5.8 rebounds and 3.3 assists in his redshirt senior year. He is also averaging 53.1 percent shooting from the field and 29.4 percent from beyond the arc.

What gives Peter Kiss his edge?

The nation’s leading scorer was recently asked this very question. His answer was candid and honest:

“I think it comes from me not always being very good at basketball when I was younger, so I had to play with an edge,” Kiss said. “I sort of carried that as I progressed with basketball.”

Kiss said his coach Jared Grasso “allows me to be me,” but also said there’s times his coach has to reel him back in.

Take this moment, for example, in the 2021 NEC championship game — a 73-68 win for Mount St. Mary’s. Kiss fouled out, prompting the senior to rip off his jersey.

So, it appears that emotion can go both ways. Which Peter Kiss might we see Wednesday? Time will tell.

But one thing is for certain — we’re in for a show.