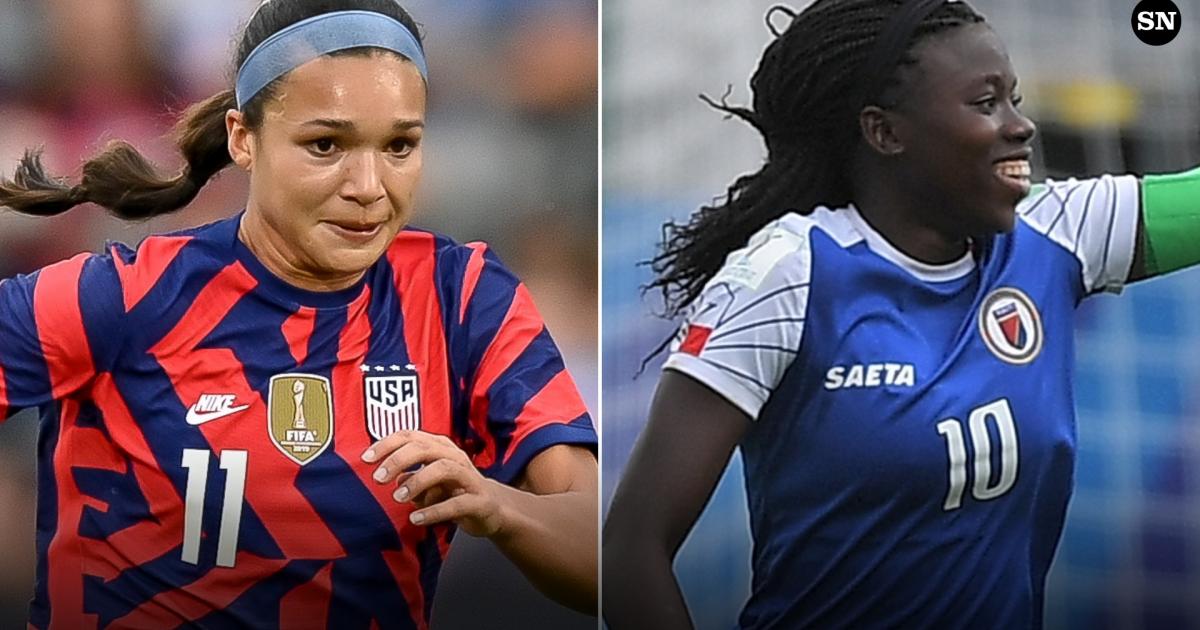 The USWNT faces Haiti on Monday in the opening match of the 2022 CONCACAF W Championship, which will hand out direct tickets to the 2023 FIFA World Cup and the 2024 Paris Olympics. Those are two international tournaments the No. 1-ranked Americans have never missed.

The five-match qualifying journey begins in a group stage that will have the Americans facing Haiti (July 4), Jamaica (July 7) and host Mexico (July 11). If the USWNT finishes in the top two in Group A, it will book a place at the 2023 World Cup in Australia and New Zealand. The team will need to win the semifinal and final to also claim a direct berth to the 2024 Olympics.

Haiti, which has never seen its senior women’s team qualify for a major championship, will be looking to spring the surprise after winning all four qualifying matches to reach the W Championship by a combined 44-0 score. The Haitians feature skillful and explosive attacking players who can potentially wreak havoc on a U.S. team that is missing a host of regulars due to injury and pregnancy.

Not only has the U.S. team won all seven matches it has played against Haiti, but it has also triumphed in 55 of 57 all-time qualifying matches for the World Cup and Olympics combined. Looking to add to that record is a group of younger players, including Sophia Smith (21), Trinity Rodman (20), Ashley Sanchez (23), Naomi Girma (22) and Emily Fox (23), who will be expected to deliver on the big stage after a solid run of friendly matches since the conclusion of the 2021 Olympics, where the USA won bronze.

3 mins from kickoff: The stadium, known as El Volcan (The Volcano) is near empty. The Haitian anthem was followed by the U.S. anthm and we’re nearly set for kickoff.

6 mins from kickoff: Teams are getting ready to take the field. It’s 37-year-old Becky Sauerbrunn and 23-year-old Nerilia Mondesir lead their respective teams out to the middle of the field.

50 mins from kickoff: USWNT lineup is out. Casey Murphy starting in goal in place of Alyssa Naeher is the biggest surprise:

Well there was ONE change to the A rotation! Will this be the same squad that starts against Mexico?? Tune in later to see (I would bet yes) https://t.co/YB2k9itFYU pic.twitter.com/IbH68Ssnnr

60 mins from kickoff: Scenes from the stadium where the USWNT will be facing Haiti. It’s home to Liga MX and Liga MX Femenil clubs Tigres UANL:

90 mins from kickoff: Fox analyst and former USWNTer Aly Wagner explains why she thinks the USA will be the team that wins it all on July 18.

.@alywagner gives us her way-too-early pick to win the @ConcacafW Championship. 👀

Agree with her choice? 🇺🇸 pic.twitter.com/1NOV2eANqJ

120 mins from kickoff: You probably didn’t know there was an official song for the CONCACAF W Championship by Cedella Marley and Skip Marley (Bob Marley’s daughter and grandson).

It will be interesting to see how U.S. manager Vlatko Andonovski shuffles his lineup to keep his 23-player squad fresh with three group matches in seven days followed potentially by a single-elimination semifinal and final. There will also be pressure to finish atop Group A to avoid a potential semifinal showdown against Olympic champion Canada.

North Carolina Courage 26-year-old goalkeeper Casey Murphy is named the starter for the opening match over 34-year-old veteran Alyssa Naeher. The rest of the lineup is arguably Andonovski’s best XI.

The Haitian side, coached by Frenchman Nicolas Delepine, includes 12 players who feature for clubs in France, including goal scorers Roselord Borgella and Batcheba Louis, and up-and-coming sensations Melchie Dumornay and Nerilia Mondesir, who have starred for Haiti in recent years at international youth tournaments. The team is coming off a 4-2 win and a 2-1 loss against Costa Rica in a pair of tuneup matches, and against the USWNT the same lineup is being fielded for the third straight match.

How to watch USWNT vs Haiti on TV, live stream

The USWNT’s opening match from Monterrey’s Estadio Universitario will be televised by CBS Sports Network in the United States. That network is streamed live on fuboTV, which offers a free trial.

Streaming platforms Paramount+ (English) and ViX (Spanish) will also carry the match in the USA.