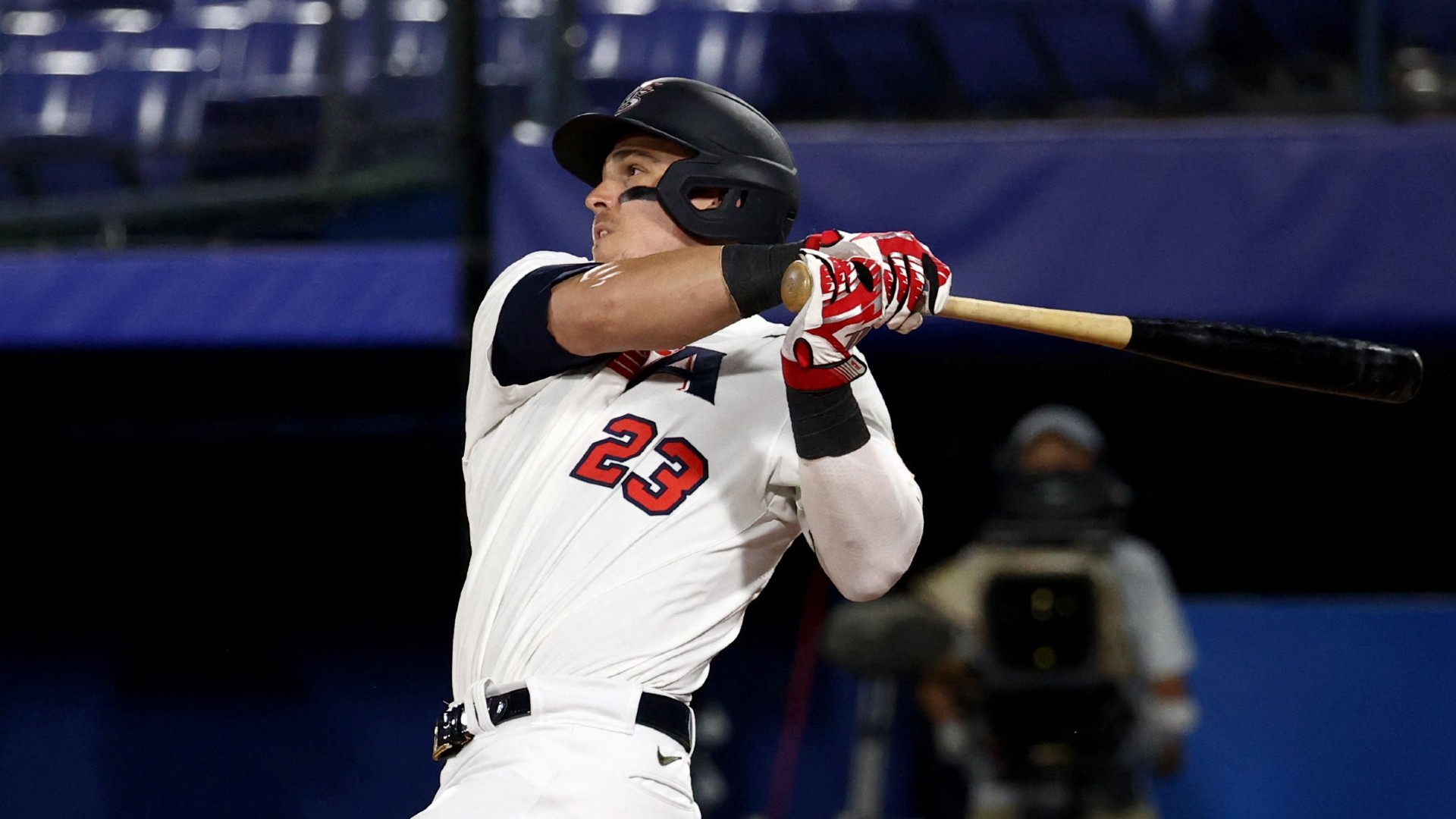 One more win for gold.

Team USA baseball is, interestingly enough, a bit of a stranger to gold medals at the Olympics. The team captured its first — and only — gold-medal victory at the 2000 Olympics, but it could be in position to land a second after their 7-2 win over Korea on Thursday.

The U.S. downed South Korea in a rematch from group play, a game the United States won 4-2. Now, after a loss to Japan earlier in the week, Team USA is one win away from the gold medal as they face Japan on Saturday — on the flip side, it’s one loss away from a silver medal.

South Korea was coming off a difficult loss to Japan on Wednesday morning, and now they’ll face the Dominican Republic in the bronze-medal game on Friday night.

Sporting News provided highlights, updates and more from the USA’s semifinal win vs. the Republic of Korea below.

9:17 a.m. END OF GAME: Anthony Carter grabs a comebacker, and the U.S. is going to play for gold.

9:15 a.m.:  Anthony Carter with two outs in the eighth and is looking to close the door on Korea’s gold-medal hopes.

9:08 a.m. END OF EIGHTH:  Nothing doing for the U.S. in the eighth inning, and they just need three outs to head to the gold-medal game.

8:58 a.m.:  Anthony Gose lets up a lead-off walk in the eighth as Korea looks to put up a crooked number with just six outs left.

8:14 a.m.:  Nick Allen with a walk. Bases loaded, one out for Jack Lopez. And another pitching change coming for Korea.

8:10 a.m. UNITED STATES SCORING PLAY: Koloszvary with a single through the left side, scoring Frazier. United States adds a run, 3-1.

8:08 a.m.:  Jamie Westbrook with a single to right field, Todd Frazier goes first-to-third. U.S. in business with one out in the sixth.

8:03 a.m.:  That Frazier at-bat forced Korea into a pitching change. Runner on first, no outs for Eric Filia.

7:58 a.m.:  Todd Frazier locked in a good at-bat right now. Fouling off pitch after pitch. Worked a heck of a walk to lead off the home half of the sixth inning.

7:51 a.m.:  Ryder Ryan still in and gets two innocuous outs in the sixth inning. Minho Kang up next.

7:39 a.m.:  Two-out single for Austin. Runners on first and second with Triston Casas coming up.

7:37 a.m.:  Eddy Alvarez with a single through the right side. Two outs in the fifth for Tyler Austin.

7:21 a.m.:  Single to right field for Hye-seong Kim, and South Korea has something working with one out in the fifth.

7:20 a.m.:  Runner at first after Ryan hits a batter. A mistake in an otherwise very good outing.

6:58 a.m.:  Jack Lopez with a nice sliding grab in center field. He was playing deep and raced in for the catch.

6:39 a.m. END OF SECOND:  Lopez is called out at second after replay review. U.S. still takes the lead on Kolozsvary scoring play. 1-0, U.S.

6:37 a.m. UNITED STATES SCORING PLAY: Olympics or Little League? Jack Lopez with a single to center field, Kolozsvary scores from second. Lopez caught in a run down, reaches second and then scrambles to third. The play is reviewed, and Lopez is called out trying to advance to second on a diving tag. U.S. still takes the lead, 1-0.

6:27 a.m. END TOP SECOND:  Ryan gets another fly ball to center field on a well-hit ball to end the top half of the inning.

6:26 a.m.:  This umpire is calling it very  tight early on, as Joe Ryan is robbed of a few strikes in the second at-bat of the inning.

READ  Why do Olympic athletes bite their medals? Explaining the long-standing tradition and how it started

6:19 a.m.:  The United States is in business: Todd Frazier with a two-out double, Casas advances to third. Runners in scoring position with two outs in the first. Eric Filia up.

6:17 a.m.:  Tristan Casas continues his hot tournament, working a two-out walk. Umpire his a tight, tight strike zone early on in this game.

6:06 a.m.:  Lee Jung-hoo with a two-out double, and South Korea has their first baserunner of the night for Japan.

So Korea’s starting pitcher vs USA is a 19-year old LHP who is also a rookie in KBO… and now he’s asked to pitch in the most crucial game to date for the team, as well as for his teammates who haven’t taken care of their mandatory military service stuff.

Team USA and South Korea meet in a rematch of their group-play game in the semifinals on Thursday, Aug. 5.

The United States is vying for its first gold medal in baseball since 2000.

How to watch USA Baseball vs. South Korea semifinal game

As currently scheduled, USA Network will be carrying the semifinal game between the U.S. and South Korea on Thursday morning.

Regardless of TV channel, you’ll also be able to live stream the game on NBCOlympics.com and the NBC Sports App.

FuboTV, which carries NBC and its sister networks, will also be a viable streaming option. FuboTV offers a 7-day free trial.