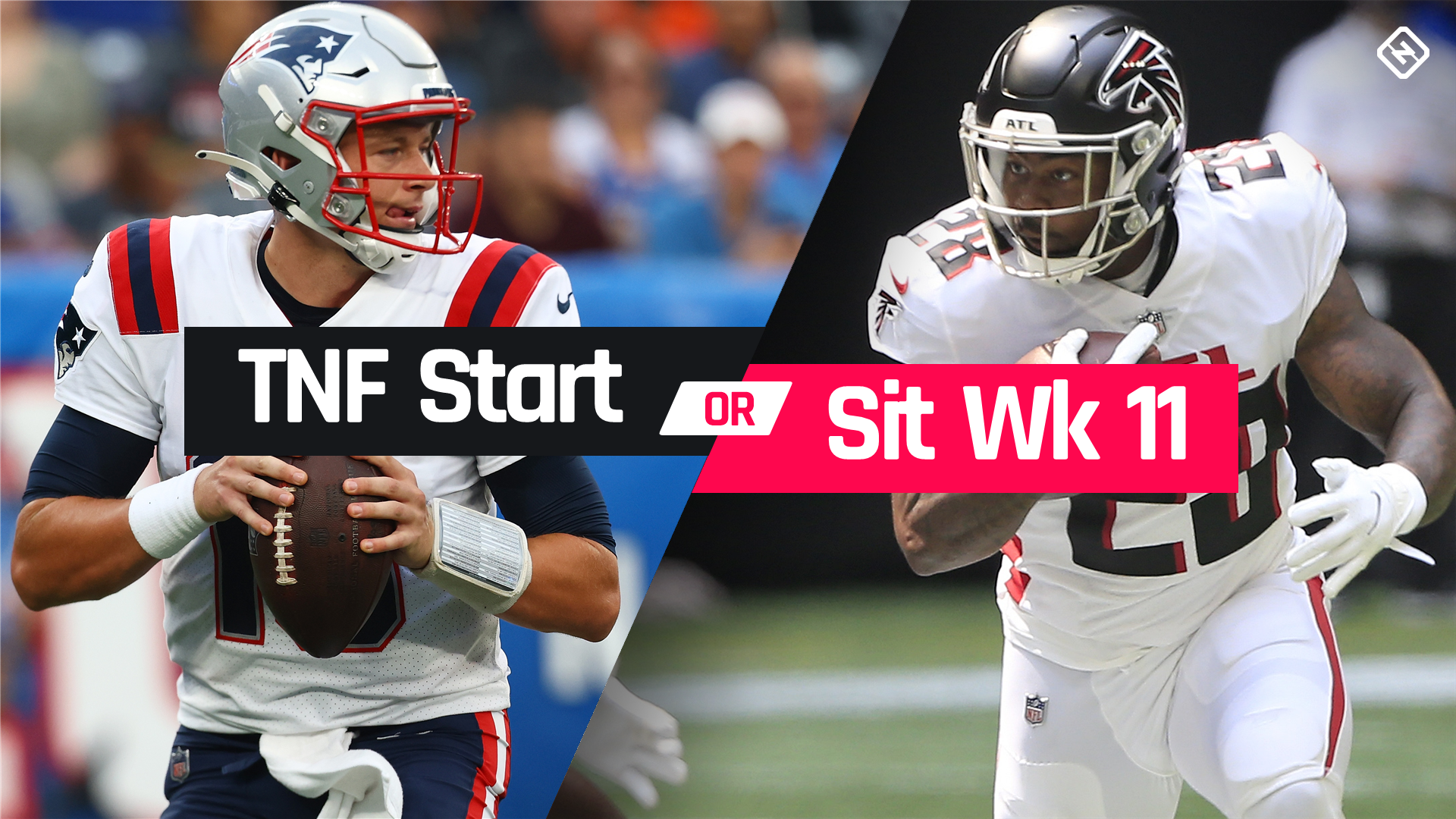 Thursday Night Football is back to kick off another fantasy football week, and Week 11 brings a one-sided feeling matchup between the Patriots and Falcons (8:20 p.m. ET, Fox, NFL Network, Amazon Prime Video). As always, you want to make the right fantasy start ’em, sit ’em decisions, either by deploying players who can give you a nice early lead going into the Sunday and Monday action or avoiding players who are bound to disappoint in prime time.

The Patriots’ offense is buzzing after ripping the Browns in New England, while the Falcons are trying to recover against a tough defense at home after their absolute clunker against the Cowboys.

Here’s breaking down the entire start ’em sit ’em picture for TNF, including a couple DFS lineup suggestions for FanDuel and DraftKings:

Patriots: Who to start or sit in fantasy football on Thursday night

Jones is still a QB2 for the season, but he’s coming off the first three-TD pass game of his career against the Browns and the fourth multiple-TD game of his rookie season. Two have come in the past four games. He’s gaining confidence playing off the run and the Patriots are trusting him more with key passes, especially in the red zone.

The fact Jones broke out in a tricky spot vs. Cleveland is a good sign that he can be more helpful in fantasy football in the final few weeks. Atlanta has allowed the third-most fantasy points to QBs, with only Zach Wilson and Sam Darnold stinking. Jones is better than both and should put up the ol’ 250 yards and two TDs as his floor even in a low-volume passing game.

Harris is still the lead power back and a solid scorer after a week off, but now that he’s back, he should be an RB2. Stevenson retains some flex status in what should be a positive game script in the second half. Both are in play in this highly favorable matchup.

Bourne doesn’t get a ton of targets, about four a game, as the Patriots spread the ball around, but he’s been effective with 33 catches, 520 yards and three TDs. He also added 71 rushing yards. Bourne is coming off a monster game against the Browns, posting 141 yards and a TD on seven touches. Along with giving up a lot of points to fantasy QBs, the Falcons’ secondary also struggles with all kinds of wide receivers. He should be owned in more leagues given how he’s scoring. He’s a WR3 with WR2 upside again in this matchup.

Meyers can also eat in the slot to complement Bourne as the Patriots should continue to open up the offense. Expect the Falcons to do everything to stop the run and make Jones put the ball up in the air more often. He’s more of a borderline WR3/flex, which also means Nelson Agholor is unplayable behind him and Bourne.

Henry, who faded late in his time with the Chargers because of injuries, is back to being a strong TE1 in whatever format. It’s to the point the Patriots don’t even need their other high-priced free-agent addition tight end, Jonnu Smith, to help in the passing game. Smith (shoulder) was made inactive last week. Henry has 31 catches for 353 yards and seven TDs, one short of his career high with the Chargers. He’s scored in six of the past seven games. The Falcons have allowed scores to Dallas Goedert, Rob Gronkowski and Mike Gesicki this season.

The Pats are the No. 2 fantasy option in the game this season, right behind the division-rival Bills. They do their best preying on bad or limited offenses. The Falcons qualify as one.

Question for you, folks: Who’s the No. 1 kicker in fantasy this season? You’ve got to be Folk-ing kidding me, but it’s this guy. Set it and don’t forget it.

Falcons: Who to start or sit in fantasy football on Thursday night

Ryan is a hard QB to figure out because you never know which version of him will appear from week to week. Even when you think you have it right based on matchup and recent performance, he tends to yo-yo. That trend would suggest he can surprise in this brutal matchup, especially in his favorite friendly confines of his home dome. But wiser heads would tell you only the Bills allow fewer points than the Patriots to fantasy QBs.

Davis wasn’t doing much, so it was no shock the Falcons turned a lot more to Gallman with Patterson (ankle) hurting and the game out of hand against the Cowboys. Either one should be busy with garbage checkdowns and second-half running work when Ryan and the Falcons are trying in vain to chase down Jones and the Patriots. Gallman is a volume-based play for sure, and the Patriots did give up big scrimmage digits to the Browns’ D’Ernest Johnson in Week 10.

Pitts, based on what else is going on in this offense, will be the classic “one thing” on the Falcons that Belichick tries to take away from Ryan. The Patriots have a strong tight end defense anyway and will feel comfortable with their corners dominating with no Calvin Ridley (personal). The rookie tight end is athletic and skilled enough to have his moments, but he needs some garbage-time production against zone defense and maybe a TD to salvage his night. Only the Broncos and Cardinals are tougher in containing tight ends in fantasy.

With Ridley out and Julio Jones long gone, some fantasy owners have been trying to force these two into lineups. It’s happened a little for Gage and a little for Sharpe, but neither is reliable with an obvious floor of zero. This matchup against the Patriots’ cornerbacks is brutal, too.

The Falcons won’t score often enough in this game and will be limited in field-goal opportunities. Koo has fallen off badly because of the limited offense, and you can do much better to get FG and PAT chances. The Patriots have allowed the sixth-fewest points per game to fantasy kickers.

The Falcons’ defense has flashed for a few moments but simply isn’t good, especially against superior diverse offenses such as the Patriots’.

Here’s believing in Jones and avoiding the potential split in the Patriots backfield, which also was an expensive DFS investment either way in Harris or Stevenson. Henry and Bourne are Jones’ top targets now, while Gallman and the diminutive Zaccheaus can give us some return in likely garbage time.

Everything stays the same here based on the price points except for the extra lineup spot to get in the red-hot Patriots defense that’s making a ton of big plays.