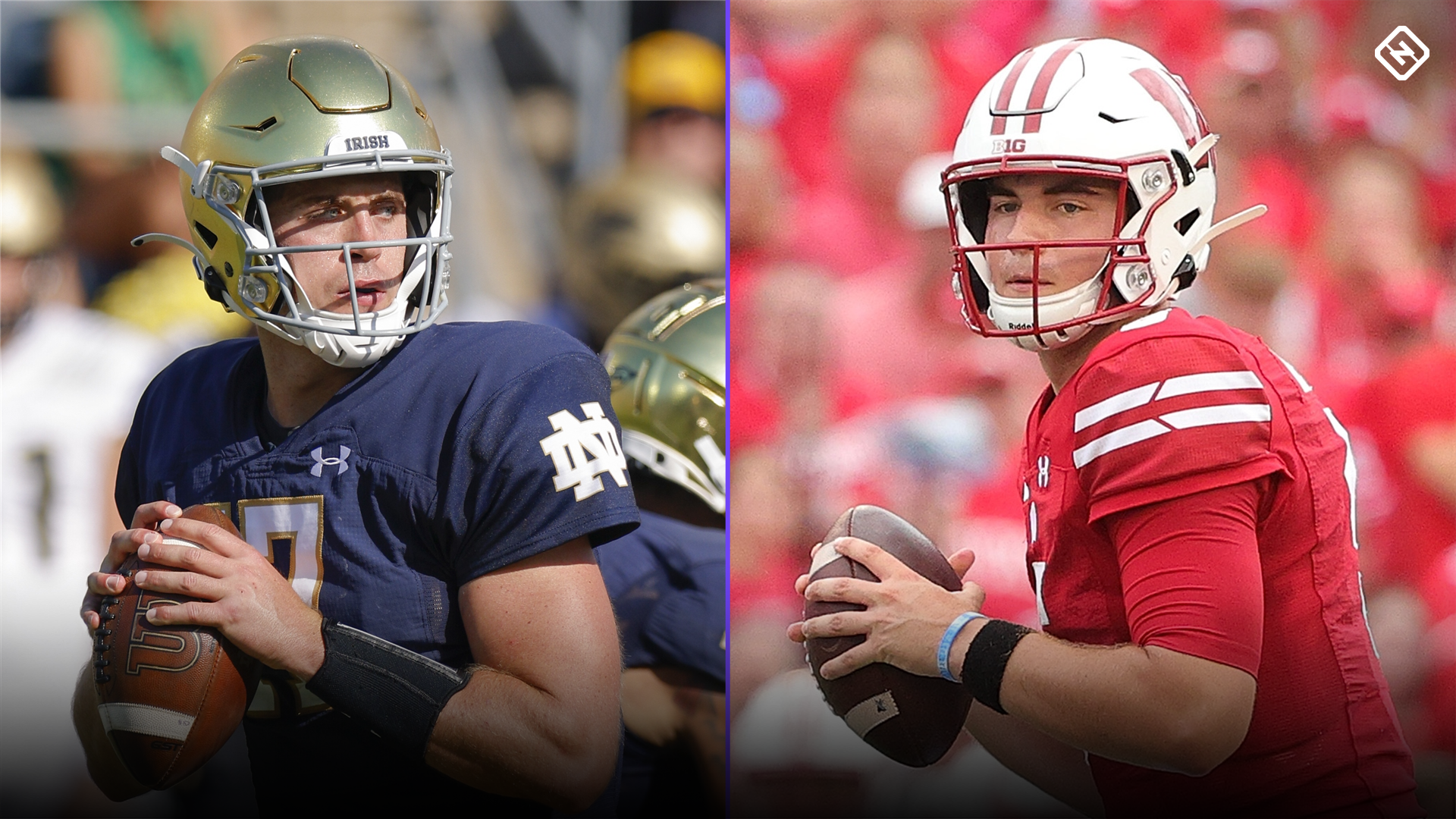 Notre Dame continues its bid for Brian Kelly’s third College Football Playoff appearance on Saturday against what is likely the Fighting Irish’s toughest test of the 2021 season thus far: No. 18 Wisconsin.

The Badgers may have suffered a season-opening loss to Penn State — a team now ranked No. 6 nationally in the AP Top 25 poll — but they managed to bounce back nicely for a 34-7 win over Eastern Michigan. The Badgers followed with a Week 3 bye to prep for No. 12 Notre Dame, a team that has yet to live up to its ranking this season.

The Fighting Irish are 3-0 this season, but none of their wins has done much to engender confidence in this team. They needed overtime and a misfire by Florida State coach Mike Norvell to beat the still winless Seminoles. They followed up a week later with a subpar performance against Toledo, needing a last-minute touchdown from quarterback Jack Coan to beat Toledo. The Irish put their “best” game together against Purdue in Week 3, but they still only won by a final score of 27-14.

Speaking of Coan, Saturday’s game vs. Wisconsin will be a homecoming of sorts for the Wisconsin transfer. He already seems like he’s on pace to match his best season for the Badgers, throwing for 828 yards and eight touchdowns to just two interceptions. He’ll need to have a big game against the Badgers’ defense, which leads the nation by allowing only 33.0 yards per game on the ground.

Sporting News is tracking live scoring updates and highlights from Notre Dame vs. Wisconsin on Saturday afternoon. Follow below for complete results from the Week 4 college football game.

3:10 p.m.: Pyne absolutely zips a ball to the sideline for a third-down conversion to Austin. Big play for the Fighting Irish.

3:06 p.m.: Good news and bad for Notre Dame: Coan is on the sideline with his helmet on, so it appears his injury isn’t overly serious. But according to the Fox telecast, his day is still done. It’s up to Pyne to take Notre Dame the rest of the way.

3 p.m.: Uh-oh. Devin Chandler jumps out of bounds (a la Najee Harris) but takes a late hit out of bounds by Notre Dame’s TaRiq Bracy. That gives Wisconsin the ball at its 47-yard line.

2:56 p.m.: KICKOFF RETURN FOR TOUCHDOWN, NOTRE DAME. Chris Tyree has the longest play of the day, and it couldn’t have come at a better time for Notre Dame: His 98-yard kickoff return for touchdown gives the Fighting Irish the lead back, making it 17-13 Notre Dame with 14:01 remaining.

2:53 p.m.: FIELD GOAL, WISCONSIN. Again, the Fighting Irish only bend. They hold Larsh to a 27-yard field goal after forcing an incompletion on third down. It’s 13-10 Wisconsin with 14:14 left in the game.

2:51 p.m.: Backup quarterback Drew Pyne had a couple nice throws to start the drive, but it ends in a punt. On the ensuing drive, he’s strip-sacked to give Wisconsin the ball at the Notre Dame 39.

2:32 p.m.: Nice move by Notre Dame linebacker Bo Bauer to slash through the offensive line and bat a Mertz pass into the dirt. Badgers punt on fourth-and-2 down to the 11.

2:26 p.m.: Bad news for Notre Dame; they can’t convert on third-and-20 following a false start, and Coan limps off the field. He may have been hurt on the previous sack.

2:16 p.m.: And there’s the offensive spark Wisconsin needed: Mellusi rushed for 35 yards down to the Notre Dame 21. That’s the biggest rushing play by either offense by a significant margin all day.

2:12 p.m.: Coan completes a pass to the Wisconsin bench on third down; that has to be who he was throwing to, because there wasn’t a player in the vicinity, from either team. Punt upcoming.

2:10 p.m.: Notre Dame takes the ball over after the touchback. Coan airs it out on first down but overthrows his receiver. Second down.

2:03 p.m.: That’s a false start for Wisconsin to start the second half. Not ideal.

1:40 p.m.: There’s a 5-yard punt from Wisconsin, giving the Fighting Irish the ball just inside their 30 with 19 seconds left. Will Kelly try and get the team in field goal range?

1:38 p.m.: Near disaster for Wisconsin. Mertz bobbles a low snap, tries to get the first down and fumbles in the act of being tackled. Tight end Jake Ferguson jumps on it, giving the Badgers the chance to at least punt it away.

1:35 p.m.: Offside on Notre Dame gets the Badgers a little breathing room.

1:34 p.m.: Wow, Jay Bramblett just punted it 73 yards all the way down to the Wisconsin 9. The Wisconsin receiver lost the ball in the sun and it bounced a decent ways, but still.

1:33 p.m.: There’s another sack on Coan, this one from linebacker Nick Herbig. Notre Dame is forced to punt on fourth-and-14 from its 19.

1:30 p.m.: Mertz had Chimere Dike wide open down but overthrew him into the sideline. Tough break. Notre Dame takes over near its 25-yard-line after the punt; there’s 3:46 left in the quarter.

1:26 p.m.: Devin Chandler gets into Notre Dame territory, but it’s negated by a block in the back. Wisconsin’s heading back to its 31 after the nice return.

1:21 p.m.: TOUCHDOWN, NOTRE DAME. The review doesn’t take long to confirm it’s a touchdown. Austin caught the ball and took several steps before losing the ball on the ground. He had already crossed the plane into the end zone, so no issue there. That makes it 10-3 Notre Dame with 4:48 left in the half.

1:20 p.m.: Coan hits Austin for what looks like a 36-yard touchdown, which is what it’s called on the field. But pretty good coverage by Wisconsin’s Faion Hicks knocks the ball loose as Austin hits the ground.

1:15 p.m.: Wisconsin’s Leo Chenel gets an interception off a tipped ball, but it’s negated by a pass interference call by Noah Burks negates the turnover. Wisconsin now has the ball at Wisconsin’s 48.

1:11 p.m.: INTERCEPTION, NOTRE DAME. And there’s the first turnover of the game! Cam Hart cuts a route and picks off a Mertz pass at Notre Dame’s 49.

1:08 p.m.: Notre Dame looks to hold Wisconsin to a three-and-out, but there are multiple flags on the play. Wisconsin declines a pass interference penalty on Notre Dame, but accepts a roughing-the-passer penalty against safety Kyle Hamilton. That’s the first penalty of the game for either team.

1:01 p.m.: Notre Dame can’t extend the drive again. Wisconsin gets to Coan on a four-man rush, with C.J. Goetz getting the 3-yard sack.

12:57 p.m.: Williams knifes his way through the defense for a 2-yard gain. Notre Dame gets a fresh set of downs at the Wisconsin 41.

12:43 p.m.: TURNOVER ON DOWNS, WISCONSIN. Great stand by Notre Dame there; Mertz had a receiver open for the first down on third-and-3, but didn’t throw the ball in time. The Badgers opt to go for it on fourth-and-1 and are stuffed for no gain. Irish take over from their 21.

12:40 p.m.: One play later, Mertz puts it on the money for a 43-yard gain to tight end Clay Cundiff, who makes the over-the-shoulder catch. Badgers driving at the 30.

12:38 p.m.: Nothing doing for the Irish. They have a three-and-out and are forced to play the battle of field position. Wisconsin takes over at its 23.

12:33 p.m.: Notre Dame’s defense does its job, forcing a three-and-out on Wisconsin’s ensuing drive. The Irish take over at their 41 after the punt.

12:29 p.m.: MISSED FIELD GOAL, NOTRE DAME. Jonathan Doerer can’t get the Fighting Irish on the board. He misses wide right from 39 yards out, three plays after Notre Dame had first-and-goal from the 10.

12:28 p.m.: Oof. Coan is taken down in the backfield for the third time. He trips over his own tackle, Josh Lugg, and loses 9 yards to the Wisconsin 21. No sack, though the defense is getting pressure on him.

12:27 p.m.: Near disaster for Notre Dame: Williams is bottled up in the backfield and fumbles the ball. He jumps back on it, but now the Irish face second-and-goal from the 13.

12:26 p.m.: Another first-down completion: Coan connects with tight end Michael Mayer for 6 yards on third down, down to the 10.

12:23 p.m.: There’s two more first down completions by Coan; he hits Joe Wilkins Jr. for a 18-yard gain to the 37, then Braden Lenzy for another 16 yards to the 21. That’s eight straight passes on this drive.

12:16 p.m.: Coan stands in the pocket on second down and hits Avery Davis for a 20-yard gain. Good reaction after getting sacked twice early. Notre Dame has a new set of downs at the 33.

12:16 p.m.: Wisconsin dials up another blitz and gets Coan again for another 7-yard loss. Notre Dame has it second-and-17 from its 13.

12:09 p.m.: Wisconsin gets the ball at the Notre Dame 45; Graham Mertz completes his first pass to Kendric Pryor for 22 yards, and the Badgers are already knocking on Notre Dame’s door.

12:07 p.m.: Not a great start for Notre Dame, which gets the ball first: Coan is sacked for a loss of 7 on second down, then nearly throws an interception on third-and-15. That’s a three-and-out, and Wisconsin’s turn on offense is up next.

How to watch Notre Dame vs. Wisconsin

Notre Dame vs. Wisconsin will be broadcast nationally on Fox starting at noon ET. Fox’s Big Noon Kickoff and ESPN’s College GameDay will both be live ahead of kickoff in Chicago. Gus Johnson and Joel Klatt will call the game from the booth while Jenny Taft acts as a sideline reporter.