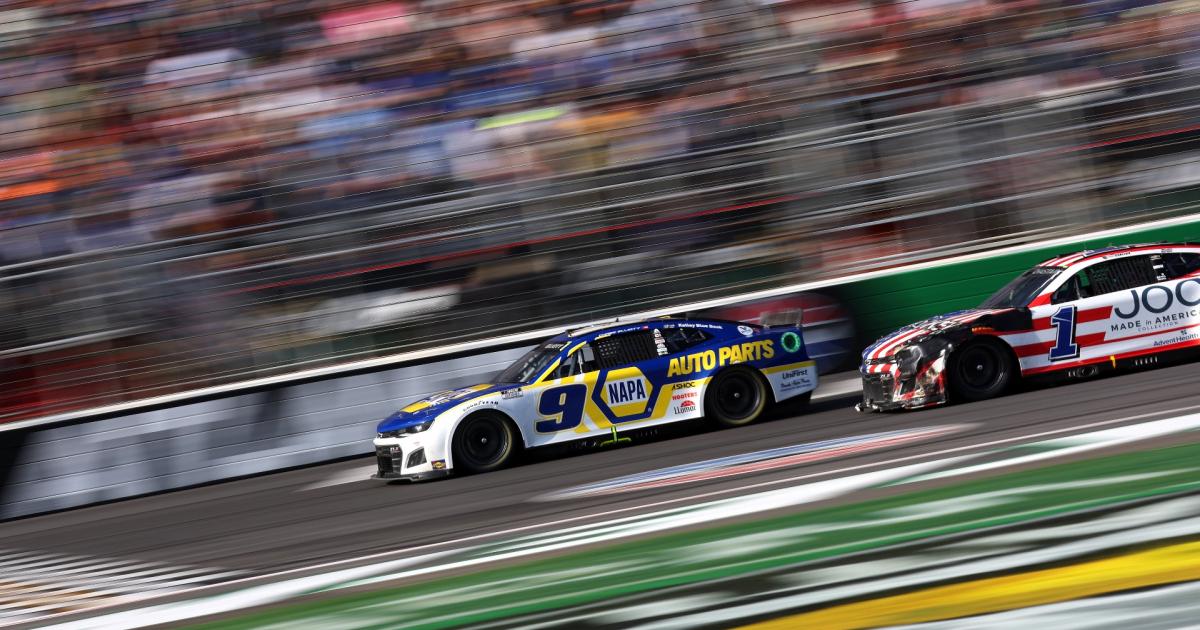 As a plume of dust erupted behind them, Hendrick Motorsports’ Chase Elliott and TrackHouse Racing’s Ross Chastain had one turn to go to decide who was going to win the Quaker State 400.

It was an apt way to end the day; Sunday’s race had been littered with wrecks and caution flags throughout. In the end, though, it was Elliott who took the checkered flag — his third victory of this year’s Cup Series’ circuit.

Elliott, who held the pole after a speedy qualifying run, was in control for much of the race’s opening proceedings.

Then, Stage 2 happened. That’s when the wrecks started rolling in. And it changed the whole landscape of the race.

Chastain, once again, was at the heart of the controversy. The much-maligned aggressive driver pushed the envelope once more, drawing the ire of Richard Childress Racing’s Austin Dillon, who flamed out after a Chastain-induced spill.

It set the stage for a wild race, one that saw more than 10 caution flags waved. Corey LaJoie, who entered Sunday’s race as the 31st-ranked driver in the Cup Series, was impressive, capitalizing on all the turmoil to give himself a chance to notch his first Cup Series win.

Still, it was Elliott who ended the day in the winner’s circle, celebrating with the customary bushel of peaches. Pretty good day at the office for the hometown kid.

Put that car in the Georgia Racing Hall of Fame! pic.twitter.com/lbTPBEnQRq

Another wild one to add to a wild season. pic.twitter.com/jhQ35Uvnna

The Sporting News provided live updates and highlights from the Quaker State 400 at Atlanta. Below are the results of the race as it happened.

6:30 p.m.: Elliott takes the checkered flag! What a race from him and LaJoie! Sensational stuff!

6:23 p.m.: LaJoie takes the lead but a caution flag is waved! Three laps to go and LaJoie has a chance at securing a huge upset!

6:09 p.m.: And that’s another caution flag! It’s Hamlin and Chastain again. Chastain bumps into Hamlin and makes him spin out. Unfortunate stuff for Hamlin, seems like Chastain strikes again.

6:08 p.m.: After the race restart, it’s Truex, LaJoie and Elliott competing for first.

6:00 p.m.: That’s another caution flag waved, this time after Christopher Bell spins out with some tire issues. About 20 laps to go now.

5:49 p.m.: Elliott holding firm in first, followed by Truex Jr. and LaJoie. Elliott’s No. 9 car is approaching 180 mph and seems fairly comfortable at the moment. 41 laps to the finish.

5:42 p.m.: LaJoie and Elliott going back and forth for first place. Elliott has the lead at the moment. Regardless of what happens, though, it’s been a really strong showing by LaJoie, who has never won a race in the Cup Series.

Win, lose or draw, it’s been fun to see @CoreyLaJoie LaJoie wheel it at the front of the pack today. #Supershoe

5:39 p.m.: Corey LaJoie is in first place! He’s really gunning for the win. Chasten, Elliott, Truex Jr. and Hamlin all sit within .2 seconds of him for the lead. 60 laps left in the race and things are really heating up!

5:25 p.m.: Chastain has the lead with 79 laps to go. Elliott holding tight — sitting less than a tenth of a second behind Chastain. Corey LaJoie (surprisingly) is in third place. Stage 3 is off to a compelling start, for sure.

5:14 p.m.: Another wreck! Ty Dillon, Kyle Larson and Garrett Smithley among the drivers involved. Seems Smithley car was loose, creating the conditions for the wreck to take place. Unfortunately end of the day for Smithley, but lots of race remaining for everyone else.

Contenders see their days come to an end. pic.twitter.com/8fopwkS5Ag

5:12 p.m.: Erik Jones and Austin Cindric competing for pole position early in Stage 3. It’s been a revolving door of characters at the front at different points in the day.

5:00 p.m.: And another caution, this time with one lap to go in the stage. Bowman’s tires give out, causing him to spin and clip the wall with his rear bumper.

Elliott takes the stage under caution. What a day.

Stage 2 ends under caution in the #QS400. pic.twitter.com/ra7jM5YytH

4:57 p.m.: Elliott takes pole position once again! Veered past Reddick’s No. 8 car with ease as the crowd roars. Seems they’re rooting on their hometown favorite, as well.

4:54 p.m.: Reddick takes the lead! Byron drops to fourth; he was unable to secure the outside position, giving Reddick the space to get ahead.

4:52 p.m.: Byron holds pole position with 17 laps to go in Stage 2. Kurt Busch and Tyler Reddick jostling for second and third place at the moment.

4:43 p.m.: Sixth caution flag of the day is waved, this time for Chase Briscoe. He spun out and took major damage to the back right wheel. Not sure if Briscoe will be able to continue.

4:37 p.m.: Stenhouse is vocally frustrated. It seems his wheels don’t quite have the grip when compared to other racers, something he’s communicating with his team.

4:33 p.m.: With 41 laps to go, William Byron holds a slight edge over Tyler Reddick. Kurt Busch, Christopher Bell and Ryan Blaney all within a half a second of Byron, though.

It has been tight.

4:24 p.m.: That’s another caution flag waved, this time for Chris Buescher’s No. 17 car. Right tire seemed to pop after a little contact with the wall. Might be related to damage suffered during that major wreck.

4:20 p.m.: Race just restarted after a lengthy delay. William Byron, Harrison Burton and Todd Gilliland all competing for top spot along with Elliott and Reddick. That wreck might have just given some drivers a new lease on life.

4:16 p.m.: Chastain is certainly an aggressive driver. But it seems Truex Jr was a little loose already, at least according to Groovy Motorsports’ Eric Estepp.

Looked like Truex got loose on his own. Chastain being off-center probably didn’t help.

“My bad.” Truex says on the radio.

4:13 p.m.: Huge wreck between Chastain and Truex! Chastain bumps into Truex, who spins out into the wall. Team Penske’s Joey Logano ends up in the air, while Austin Dillon goes headfirst into the shock barrier. Dillon is out and on his feet, but his car is absolutely wrecked.

They found the edge.

Looks like at least nine cars were involved. Caution flag waved but lots of cleaning up to do.

3:52 p.m.: Erik Jones’ No. 43 car veers into the inside wall a bit. May have scraped the wall ever so slightly. No caution flag waved, though.

3:44 p.m.: The chaos doesn’t stop at Atlanta Motor Speedway — not even at pit road. Check out this move by Bowman:

3:38 p.m.: And it’s Elliott who takes Stage 1! Great start for the hometown kid — Elliott grew up about an hour and a half away from the racetrack.

3:36 p.m.: Elliott, Blaney and Bowman all within a second of each other as we head to the final lap of Stage 1. We look set for a wild finish to the stage.

3:32 p.m.: It’s been an absolutely frenetic start to the proceedings today. Feel like this clip encapsulates it beautifully. Not a ton of space for any driver early.

3:16 p.m.: Blaney takes the lead! Elliott and Chastain are right on his heels, as well as Reddick.

3:13 p.m.: According to Bob Pockrass, Larson is experience a little issue with his driving. Seems it might be something related to his steering.

Larson said he doesn’t know if it is a steering issue.

Today’s race is listed as starting at 3 p.m., although the green flag is scheduled to be waved at 3:27 p.m. ET.