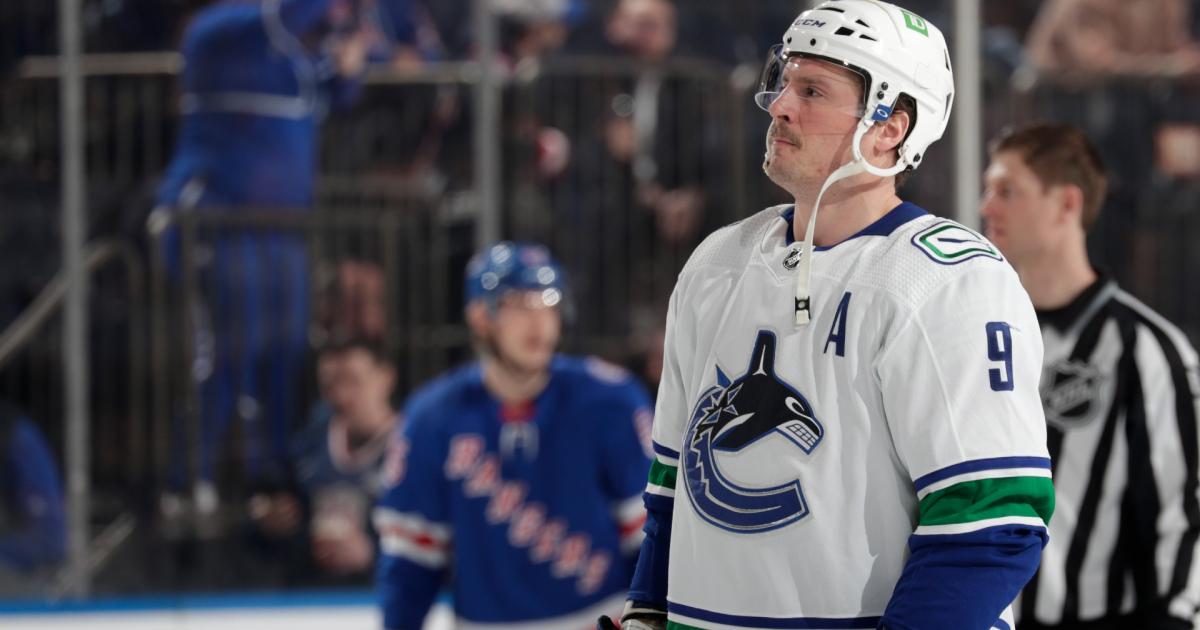 Looking around the potential trade targets at the NHL trade deadline, there aren’t many better options for contenders to acquire at forward than J.T. Miller.

The Vancouver Canucks winger is enjoying another sensational season on an underperforming team. He has 22 goals and 41 assists, good for 63 points and he is well on his way to surpassing his previous career-high in points of 72.

Those 63 points put him in a tie with Colorado’s Cale Makar for 11th in the league. It’s safe to say that any team looking to make a run at the Stanley Cup would love to have a proven scorer like Miller on their squad.

But as the deadline is getting closer and closer, a trade for Miller seems like it may not come to fruition, just a few short weeks after it seemed like a near guarantee.

TSN’s Pierre LeBrun reported on March 3 on a segment of Insider Trading that the Canucks could be looking to hold onto Miller for the future.

“When I talk to other teams around the league … what I get is Vancouver’s really not that into the idea of trading J.T. Miller. A team is really going to have to step up to get the engine of the Vancouver Canucks out of that roster.”

Let’s dissect if Vancouver should trade or keep Miller.

Making the case for the Canucks to keep J.T. Miller

It’s not every day you come across a top-10 goal scorer on a bargain deal under contract for another year. That’s what the Canucks have in Miller.

Keeping Miller would be holding onto an asset that would be extremely beneficial for the future. Sure, the Canucks could make the postseason this year and if they do, they will be relying on Miller. Vancouver currently sits just outside the playoffs in the Western Conference, three teams behind the eighth and final playoff spot. But it’s not a team that is built to go far.

Not trading Miller means the front office is looking at the upcoming years for the team. With new management in place this season, Vancouver is looking to shape the club and Miller could be in their plans. The Athletic’s Thomas Drance and Rick Dhaliwal discussed it in a recent article.

“The replacement issue is something that weighs more heavily on Canucks management than the club’s long-shot playoff chase, or the message such a deal would send to the room. Everyone in the Canucks organization is hopeful the club can beat the odds and qualify for the postseason, obviously, but in preparing for the NHL trade deadline, Canucks president of hockey operations Jim Rutherford and general manager Patrik Allvin have the big picture in mind.”

As LeBrun put it, Miller is the “engine” of the Canucks. Drance and Dhaliwal said in their piece that Miller is viewed as the team’s “best forward this season.” The Canucks can begin to retool their team around Miller, Quinn Hughes, Elias Pettersson and Thatcher Demko by instead trading pieces like Brock Boeser and Conor Garland this deadline for prospects and picks.

READ  Conor McGregor vs. Dustin Poirier 3 purse, salaries: How much money will they make at UFC 264?

Of course, come next year, we can be having these conversations yet again if the Canucks don’t sign Miller to an extension. But keeping him this season, allows the management to buy more time to discuss a long-term deal for Miller.

Making the case for the Canucks to trade J.T. Miller

The Canucks may not want to move him, but they have not shut the door completely. There are teams interested in Miller and if the Canucks have a change of heart and opt to trade him, the package they could get would be huge. The asking price from the Canucks is already reported by Drance and Dhaliwal to be “astronomical”. And rightfully so.

Miller’s a top-10 scorer with another year on his contract, carrying a very team-friendly $5.25 million cap hit. He can play both wing and center, is 28 years old and has 78 games of playoff experience under his belt.

And he’s currently elevating his trade value. He’s on a nine-game point streak entering Wednesday where he has 17 points in that span with six goals and 11 assists. As his production continues to go up, so does the asking price.

READ  Lewis Brinson says he still hears racial slur in Rockies fan video: 'It sounds a lot like the N-word'

There’s no reason why Vancouver should settle for anything less than a godfather offer. It took a package that included first-round pick and a prospect for the Calgary Flames to acquire Tyler Toffoli from the Montreal Canadiens, who while he has two more years on his contract, is a year older than Miller and does not produce the same numbers on offense.

It will probably take much more than that to get Miller, especially if the Canucks aren’t keen on giving him away in the first place. They could play hardball and be patient, waiting for an interest trade partner to miss out on other moves on deadline day and become desperate. That’s where Jim Rutherford and Patrik Allvin could squeeze a team of another prospect or pick.

Shipping off Miller would likely lean towards the side of a rebuild rather than a retool, but it’s something management needs to consider. It’s what Jim Benning failed to do during his time in the front office, resulting in players with value walking for nothing in free agency as the team sat home during the playoffs.

Vancouver would suffer short-term without Miller, but begin the process of building for the next wave of success for the Canucks.