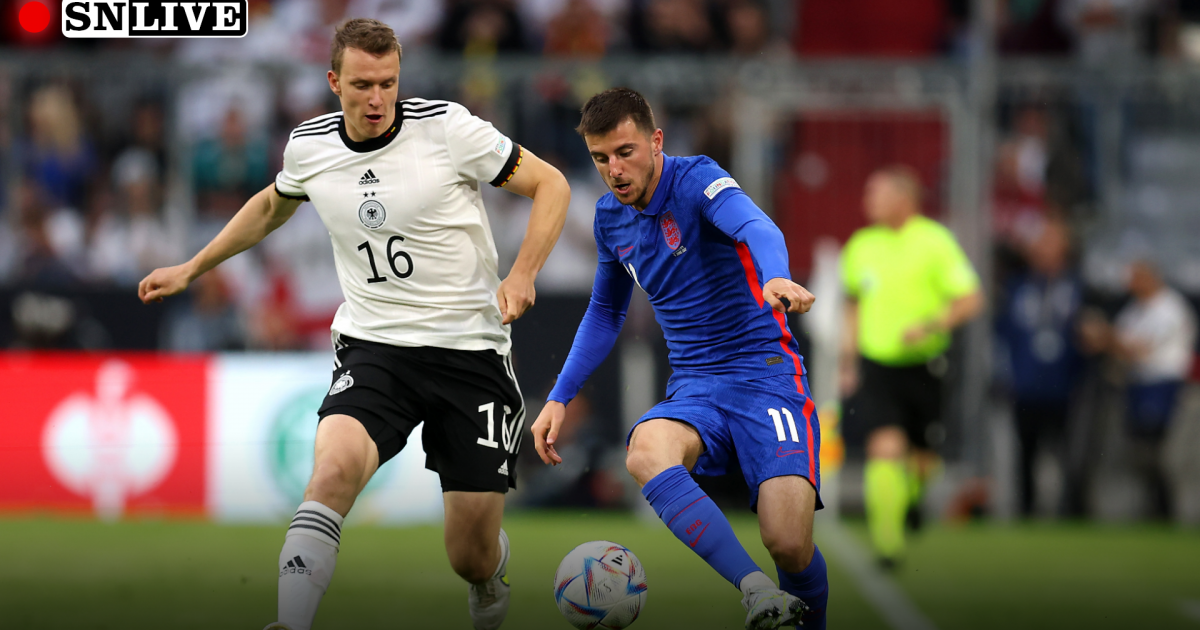 England will look to get their UEFA Nations League campaign up and running when they take on old rivals Germany in Munich.

The Three Lions claimed a 2-0 victory when the sides met in the last 16 of Euro 2020 last year but Die Mannschaft are unbeaten in 10 games since then under former Bayern Munich boss Hansi Flick.

That included a 1-1 draw against European champions Italy last time out, which meant a more impressive start in Group A3 than England.

Gareth Southgate’s men were beaten 1-0 after a limp showing against Hungary in Budapest on Saturday.

Germany vs. England live updates, highlights from the Nations League

45th minute +9: Maguire heads clear from his own six-yard box in the last action of a long half. England remain on terms and have created a couple of half-chances but they have definitely been second-best.

45th minute +8: Maguire coughs up possession to Gundogan. The problem with that is you tend not to see it for a while afterwards. Germany work it around nicely to try and find the angle and Trippier is forced into a sliding interception to thwart Hofmann. That was superb piece of defending from a player playing in an unnatural position.

45th minute +5: Havertz stands up Stones but his cross is too close to Pickford.

45th minute +4: Better from England in stoppage time. Sterling gets into a snaking run through midfield but tries to shimmy past one challenge too many. Saka gets hold of the loose ball and sends a rasping strike just wide.

45th minute +1:Ha, the referee has signalled EIGHT minutes of stoppage time to wrap up the first half. While everyone was scratching their heads over that, Saka got in down the Germany left and forced Neuer to push a well-hit effort behind. The corner comes to nought.

45th minute: Oh, well that would have put the cherry on a fine half Musiala. Kane clears a Schlotterbeck clearance out of the goalmouth from Kimmich’s free-kick and Musiala smashes goalwards but it’s too close to Pickford.

42nd minute: Long ball from Gundogan towards – you guessed it – the England right. Raum finds Havertz but he’s unable to fashion a shot on this occasion, giving a foul away. England look like the team who need half-time.

36th minute: The left flank again provides joy for Germany. Musiala pulls inside and sends Raum scampering towards the byline. He hangs up a cross for Havertz at the back post, where Trippier did very well to avert a goal.

33rd minute: Oh dear, Sterling has pulled up after pushing off to spring near halfway. He’s chatting to the referee suggesting he’s having a go at carrying on. There was a collision with Kimmich so it depends whether that’s an impact injury or something more serious and muscular.

29th minute: Your turn, England! Saka gets his dancing feet going and cuts the ball back to Bellingham outside the box. He lines up a sweet strike from 25 yards but Rudiger gets bravely in the way.

Plenty of action in the first 30 minutes at Allianz Arena, but no goals. pic.twitter.com/svrrtTZKgo

28th minute: Back up the other end – aren’t these lads supposed to be tired? – and Musiala cuts inside to have a shot blocked by Maguire. The 19-year-old is certainly relishing the occasion.

27th minute: Chance for England! Trippier goes deeper with his latest corner from the left and it falls to Kane. it’s only really a half-chance on his left foot, but German hearts will have been in mouths when that half-volley fell to a man of Kane’s prowess. Now Bellingham and Kane combine to flash the ball across the face of goal – Sterling can’t get there for one of his trademark tap-ins.

25th minute: No goal! But England have got away with one there. This wasn’t an example of a well-functioning offside trap. Maguire got dragged into a tangle with Havertz and was fortune the Chelsea forward did not get a touch. Hofmann looked to be back onside by the time the ball skipped through that scramble on halfway.

23rd minute: GOAA..No! Hofmann darts through a vacant England backline to finish coolly but the Borussia Monchengladbach wide man was given offside. It’s gone to VAR…

Arrrghhh 😩 Jonas Hofmann is in behind and tucks his shot away, but the flag correctly goes up for offside ❌ (23′)#DieMannschaft #GERENG 0-0 pic.twitter.com/PbC8Amvzdl

21st minute: This is absolutely no disrespect to Phillips’ considerable qualities, but Rice-Bellingham-Mount is a midfield configuration that plenty of England fans have been calling for, or a variation on that with the absent Phil Foden involved. It will be interesting to see how they gel. They haven’t really seen much of the ball since being thrown together.

17th minute: Pickford has to be alert to a risky backpass from Rice and then pounces on a loose ball at the second attempt with the lively Musiala in close attendance. More encouraging moments for Die Mannschaft.

16th minute: Musiala coming in off the left flank is giving Walker a bit of a headache. The Manchester City right-back got just enough on a header back to Pickford then, but he was out of position and under pressure from Germany wing-back Raum.

13th minute: Muller has the ball in the net but Germany restarted too quickly from the wrong place with a new ball after another had been blootered into the stands. The reason for the referee wanting the action to stop? Phillips is down again and he makes way for Borussia Dortmund midfield Jude Bellingham.

READ  Why do Olympic athletes bite their medals? Explaining the long-standing tradition and how it started

9th minute: They get a breather now. Schlotterbeck and Phillips just had a collision that looked pretty painful for the Leeds man as he took a knee to his right thigh. No malice at all but a possible dead leg for the reported Manchester City and Liverpool target.

7th minute: Kane gives Neuer his first work of the evening with a speculative effort. It’s been a pleasing, open start to the contest. High tempo too — it will be interesting to see if that remains.

6th minute: Muller falls over near the dugout and is credited in the pantomime style by the travelling supporters. England break forward from there and Rudiger is back well to clear Sterling’s cutback behind. Trippier’s corner is cleared.

3rd minute: Good start from Germany this, England yet to get going. Rudiger flicks a right-wing corner towards the far post and Walker makes a vital clearance behind. Maguire gets his head to the subsequent set-piece.

2nd minute: Early half-chance for Germany as Havertz finds space on the left-hand corner of the England box. He shoots low and warms Pickford’s hands, but that was too close to the England goalkeeper to cause him any trouble.

5 mins from kickoff: Here come the teams. Anthems, pleasantries and we’ll be away.

10 mins from kickoff: Southgate has more or less confirmed England will field a back four this evening. That’s the end of my crack theory chucked out just below!

15 mins from kickoff: England have a surprisingly good record in away matches against Germany — winning seven, drawing two and losing four. The most famous of those victories was on their previous visit to Munich in 2001, when Michael Owen famously scored a hat-trick in a 5-1 rout at the Olympiastadion.

The last time the #ThreeLions played Germany in Munich…

30 mins from kickoff: Of course, we’re assuming England will revert to a back four having fielded three centre-backs against Hungary. Southgate has enjoyed having flexibility between the two systems and a 3-4-3 was responsible for downing Germany at Wembley last year. Perhaps Trippier is wearing number three for a bit of kidology. The Newcastle man could line up as a left wing-back, with Walker tucking in alongside Stones and Maguire in their old 2018 World Cup setup and Saka manning the left flank.

45 mins from kickoff: Both managers have spoken about the challenges of balancing these matches with the hectic seasons their players have just endured and the Nations League doubling up as preparation for the World Cup later this year. Southgate’s five changes from the lacklustre 1-0 defeat to Hungary gives England a stronger-looking team, while Flick’s seven alterations to the side that drew 1-1 with Italy at the weekend give the Germany XI an experimental look.

53 mins from kickoff: And this is how Germany will line-up. Bayern Munich youngster Jamal Musiala – a former England international at U15, U16, U17 and U21 level – will start.

55 mins from kickoff: Here’s the England XI. Kieran Trippier starts at left-back, with Kalvin Phillips and Declan Rice resuming their Euro 2020 midfield partnership. Mason Mount will provide the link between midfield and attack, where Bukayo Saka and Sterling are set to flank captain Kane.

Ready to take on Germany! 💪 pic.twitter.com/7gos0L0DeP

1hr 10 mins from kickoff: Sterling and Kane are expected to start tonight – team news will be with you shortly – and they were very familiar matchwinners in the previous meeting. Indeed, before this match, Gareth Southgate laid down a challenge to his other attackers to match their exploits. Outside of Kane (49) and Sterling (19) the only other player in the current England squad with more than five international goals is Manchester United defender Harry Maguire (seven).

1hr 25 mins from kickoff: So, will it be repeat or revenge? The last time these two sides met, England were 2-0 winners, ending Germany’s participation in Euro 2020 and the Joachim Low era in the process. Of course, the rivalry has been more weighted in Germany’s favour over the years and Hansi Flick’s side are in ominous form. Since that Wembley reverse last year, when Raheem Sterling and Harry Kane were on target, they are unbeaten in 10 matches.

1hr 45 mins from kickoff: Hello and welcome to the Sporting News’ live coverage of the Nations League meeting between Germany and England.

Last time out against Germany…

Flick has made seven changes from the team that drew 1-1 with Italy, with former England youth star Jamal Musiala one of the men handed a start

England look a lot closer to full strength, with Southgate looking for a response after that disappointing loss in Budapest.

How to watch Germany vs. England

UK: In the UK, the match is available on free-to-air TV through Channel 4 or their streaming platform All4.

USA: The match will be exclusively on fuboTV in English. It will be available in Spanish on Univision platform ViX.

Canada: The match can be seen via DAZN.

Australia: Viewers can follow the action via Optus Sport.