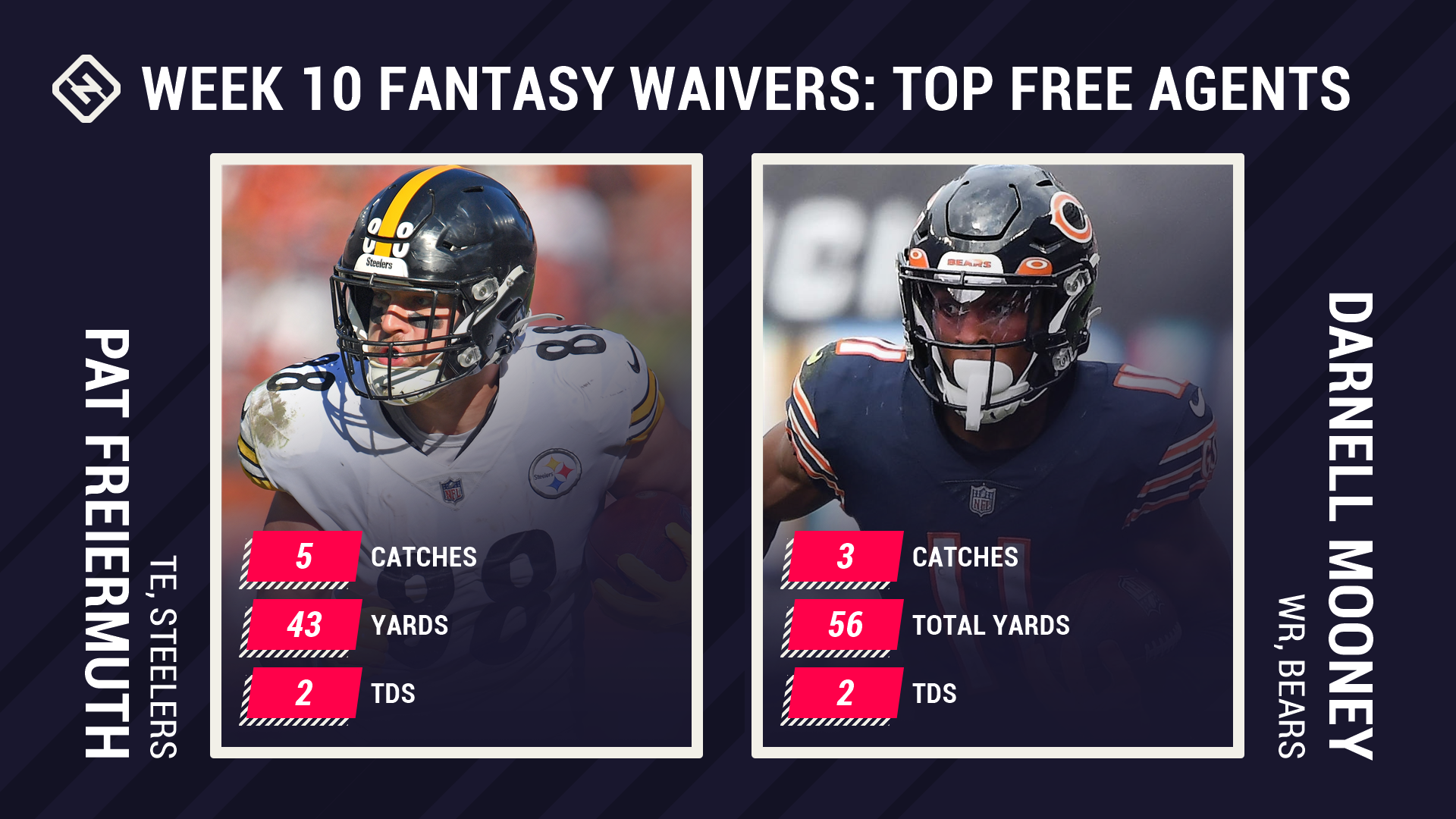 Most fantasy football owners had given up on Cole Kmet this season; some are still waiting on Darnell Mooney; others have had their eye on Pat Freiermuth for a few weeks. Wherever you fall on these three players, it’s safe to say that after their big games on Monday night, they’ll all be among the top Week 10 fantasy waiver wire pickups and free agent adds, joining guys like Jordan Howard, Devonta Freeman, Brandon Bolden/Rhamondre Stevenson, and Elijah Moore. Freiermuth might actually command a waivers claim, while Kmet and Mooney will be among the many who will be targeted as free agents after waivers clear around 4-5 a.m. ET on Wednesday mornings in ESPN and Yahoo leagues.

Our full free agent list features even more intriguing free agents, such as WRs Tim Patrick, Donovan Peoples-Jones, and Rashod Bateman. We also have several players who are eligible to come off IR this week, including Michael Gallup and Logan Thomas. Of course, we also feature a wide variety of Week 10 streaming suggestions at QB, WR, TE, and D/ST, which can be found at the end of this list. If you’re looking for a husband or a new fantasy kicker, our Week 10 kicker rankings features a list of 28 dudes who are eligible for at least one of those things.

Waivers likely won’t be overly competitive this week. Howard, Freeman, and potentially a Patriots backup will likely command medium-to-high claims, depending how badly owners in your league need a back this week. Moore, Freiermuth, and Thomas could also get claimed, but none should be considered “must-haves.”

We’re at the point in the season where it’s all about what you need and when you need it. If you’re desperate at a certain position because of byes or injuries, then by all means make sure you get that player, especially if you’re fighting for a playoff spot.

UPDATE: With Nick Chubb’s status up in the air because of a positive COVID test on Tuesday, D’Ernest Johnson could be a top waiver claim. However, it’s a risky move considering Chubb could play with two negative COVID tests 24 hours apart by Sunday.

UPDATE 2: Reports out of New Orleans suggest Alvin Kamara is dealing with an undisclosed injury, giving significant value to Mark Ingram. Like Johnson, we don’t know the details, so using a waiver claim on Ingram is a risk, but he would have considerable upside in Week 10 if Kamara is out or limited.

Unless otherwise noted, only players owned in fewer than 50 percent of Yahoo leagues considered.

Pat Freiermuth, TE, Steelers. After back-to-back seven-target games, Freiermuth tied for the Steelers’ team lead with six targets on Monday night. He caught five for 43 yards and two scores, showing how high his ceiling is in a given way. He should continue to see six-plus looks going forward, and he’ll get them all over the field. There’s a good chance he’s a top-10 TE the rest of the way, especially with highly favorable matchups against the Lions and Chargers the next two weeks.

Darnell Mooney, WR, Bears. Fantasy owners have been waiting for Mooney to break out, and he finally did on Monday night. He caught just three passes (six targets) for 41 yards, but he added a 15-yard run and scored twice. Cole Kmet (8) actually led the Bears in targets on Monday, but Mooney leads the team on the season (6.5/game). He should continue seeing regular looks, and if Justin Fields continues his perceived improvement, Mooney could really take off in the second half.

Cole Kmet, TE, Bears. Kmet set season highs in targets (8), catches (6), and yards (87) in Week 9. He took advantage of some soft defense for two catches and about 20 yards on Chicago’s final drive, but it was still clear from the start that Kmet was more involved. He might not be worth picking up this week with Chicago on bye, but a top-tier TE matchup against Baltimore awaits in Week 11. Kmet could be a real TE sleeper the rest of the way.

Michael Gallup, WR, Cowboys. We’ve expected Gallup to return for a couple weeks now, but his ailing calf hasn’t allowed it yet. It’s already been reported that this will be the week, though, and with a highly favorable matchup against Atlanta on tap, Gallup will immediately be in the WR3 conversation. He’ll have boom-or-bust flex upside every week, and he also works as a de facto handcuff to Amari Cooper and CeeDee Lamb.

DeSean Jackson, WR, Raiders. Jackson is set to take the Henry Ruggs deep threat role in Vegas. That likely won’t translate to consistent value even if Jackson stays healthy, but he’ll definitely have his big weeks. That could be as early as Week 10 against Kansas City. He has great matchups in Weeks 12-14, too (Dallas, Washington, Kansas City), so Jackson could be a difference maker through the bye weeks.