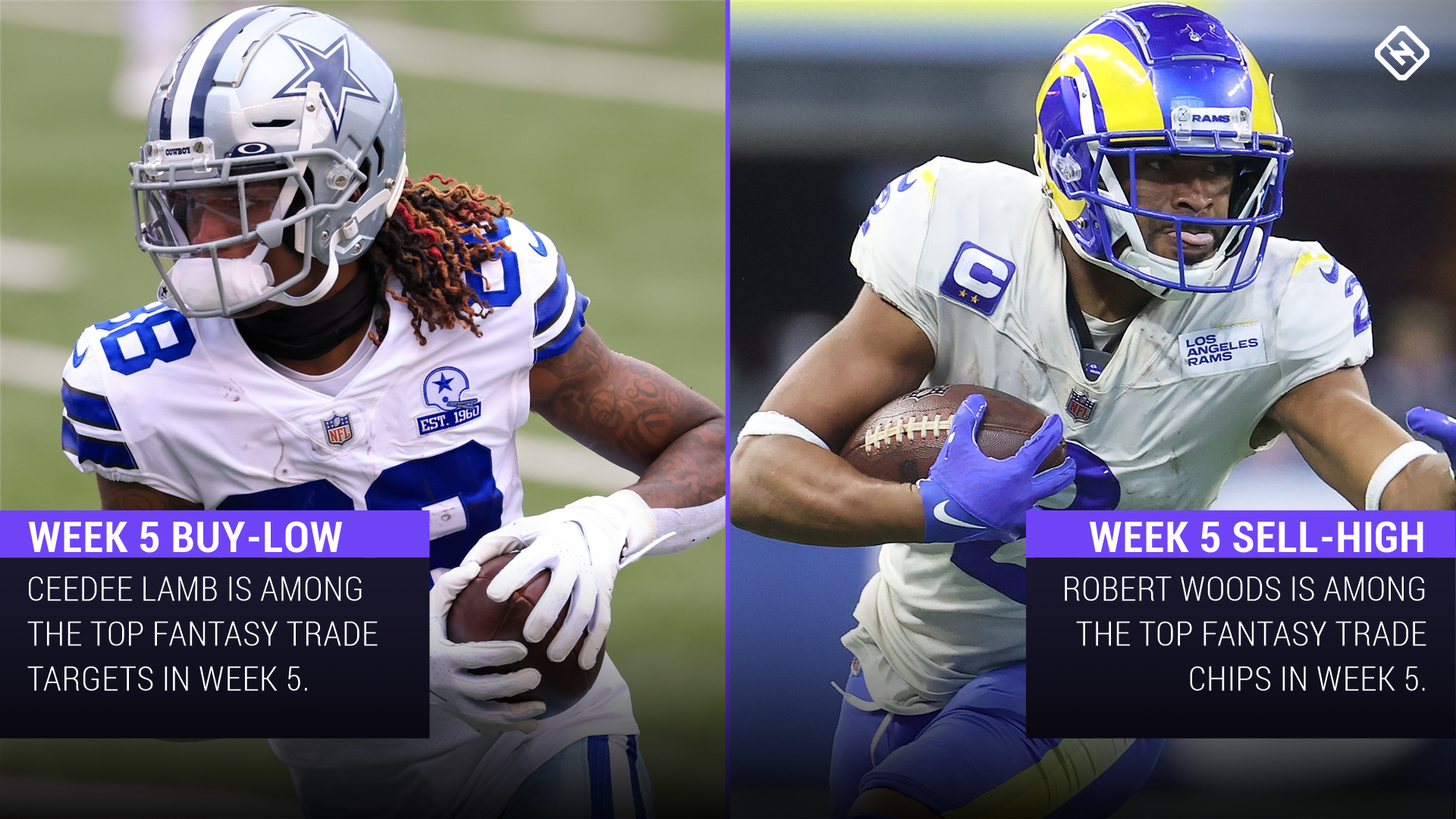 If you’re staring down the barrel of an 0-4 or 1-3 start to your fantasy football season, chances are you’re feeling desperate. Injuries might be at least partially to blame, but unless you want to just give up and focus on DFS every week, you have to do something to turn things around. Waiver wire pickups only go so far, so a trade might be the answer. Other teams in your league will be looking to make some moves now, especially with more injuries striking and bye weeks approaching, so identifying buy-low, sell-high trade targets is key. As always, FantasyPros is here to help with tips and trade advice in their Week 5 Stock Watch that includes CeeDee Lamb, Darrell Henderson, Robert Woods, Cordarrelle Patterson, and Latavius Murray, among others.

It’s tough for a struggling team to trade away one of its few highly productive players, but sometimes that’s what it takes. Unfortunately, most owners don’t want to give up what that player is worth, instead trying to move hot-starting question marks for a proven stud. We’re not necessarily recommending those types of deals, but if you can get two solid players that can provide a big boost at a position of a need plus replace 75 percent of the production of the guy you’re trading away, that can be a net positive for your team. It can be a “win” for the other owner, too, but most fantasy owners don’t just want a marginal win — they want to dominate every trade. It takes something to get something, so make your trade offers in good faith.

It’s always important to remember that trade values can change quickly in fantasy football, so don’t get too locked in on a specific target. Change your thinking as the trends change, but don’t be afraid to strike if you have a good offer on the table, even this early in the season. — Matt Lutovsky

Lamb has seen a combined eight targets over Dallas’ past two games, which isn’t what fantasy owners had in mind after Michael Gallup‘s calf injury seemingly opened the door for more opportunities. The reason for his decreased number of looks isn’t due to anything other than the Cowboys reverting to a run-heavy offense as of late. The second-year receiver is one of the most talented offensive skill players in football. The looks will come. Buy low on Lamb.

Fantasy owners didn’t know what to expect from Henderson in his return to the lineup in Sunday’s Week 4 game against the Cardinals. However, he continues to be utilized as a legit workhorse. In his two full games this year, Henderson has played 110-of-120 snaps while seeing 30-of-34 RB carries. He has also seen 100 percent of the RB targets and 100 percent of the RB touches inside both the 10- and the five-yard lines. That’s RB1 usage.

Woods’ target share continues to inch closer to Van Jefferson‘s than it does to Cooper Kupp ‘s. The veteran receiver was highly productive in garbage time in Week 4, totaling 30 yards and a score on the Rams’ final drive of the game (while trailing 37-13). Before that, he had seen just three targets. Part of the diminished usage might be due to the Rams’ offense struggling as a whole, but Woods has yet to fully reap the benefits of LA’s new-look aerial attack. There’s still a buy-low case to be made, but the late score in Week 4 could also create a selling opportunity.

READ  Mets' Marcus Stroman, Pirates' John Nogowski curse at each other for no good reason

Murray was given over 78 percent of Baltimore’s rushing attempts in Week 4 against Denver, which is the highest mark any Ravens RB has seen this season. Ty’Son Williams was a healthy scratch on Sunday, which makes Murray a worthwhile bench stash moving forward. Murray isn’t a full “buy” until we see this usage sustain, however.

On the one hand, Patterson was electric on Sunday, scoring three times as Atlanta continues to make featuring him a point of emphasis. However, he played just 23-of-76 snaps in Week 4, which isn’t the type of usage we typically want to bank on. Those concerns are mitigated by how often the Falcons draw up plays for him, but it’s something to monitor. Entering Week 5, it’s still tough to start C-Patt in a standard fantasy league. Still, he has our attention.