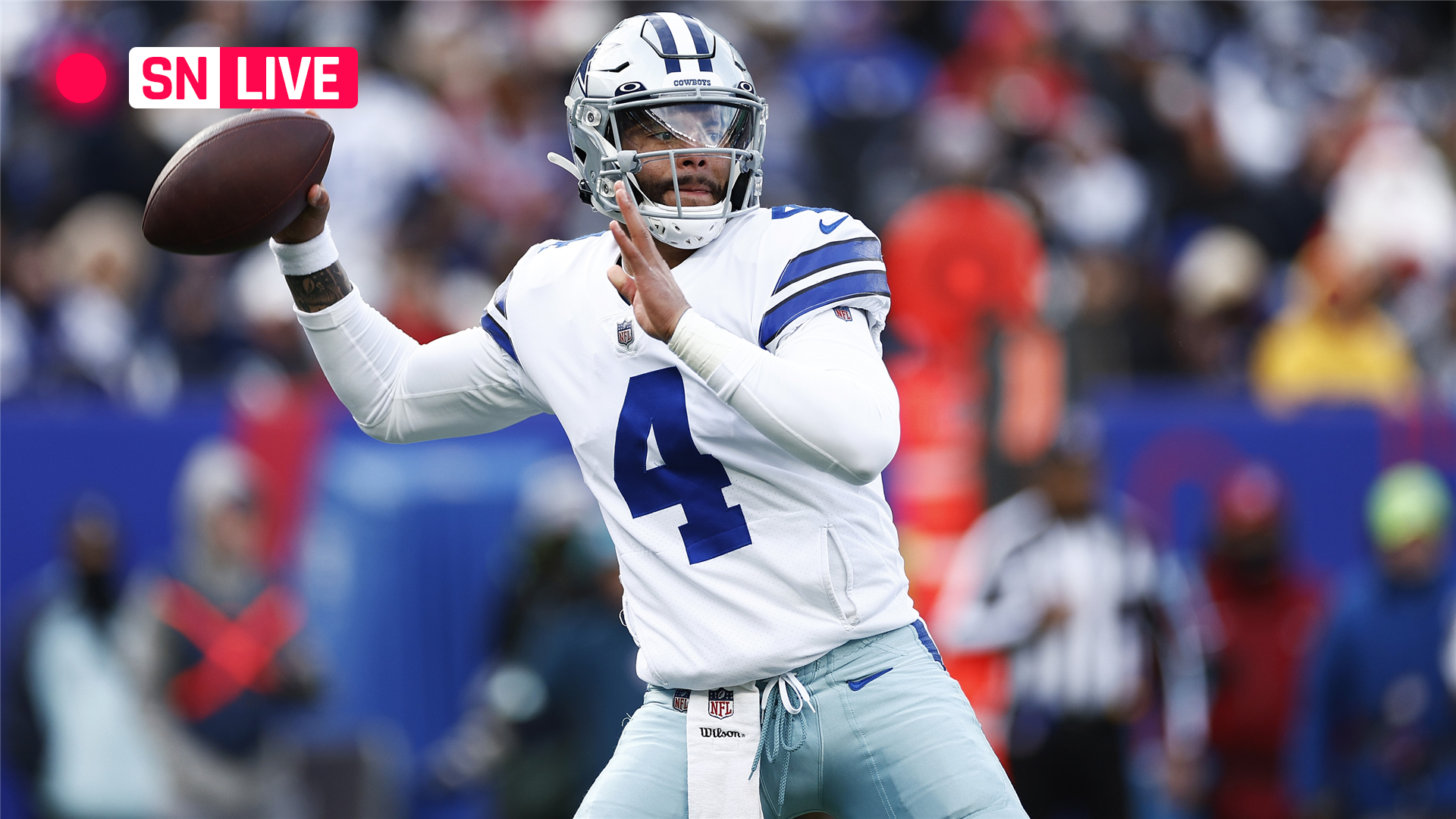 As the NFL season gets into its final weeks the playoff picture is coming into clearer focus. Two teams in the NFC — Dallas and Green Bay — have punched their tickets to the postseason, with five more playoff spots up for grabs.

One of those teams vying for a playoff spot is Washington, though they’ll have their work cut out for them. At 6-8, they currently sit in 10th place in the NFC and will need to win out to have a chance at a playoff spot.

That includes a win Sunday against Dallas, who beat Washington 27-20 with a fourth quarter comeback two weeks ago. Washington has been one of the teams hardest hit by the league’s COVID-19 protocols, with 12 of their players in the league’s protocol as of game time.

Washington has lost two in a row, but won four in a row before that, showing they’re capable of putting streaks together. But, they’ve been fairly pedestrian in terms of offensive and defensive output, ranking 23rd in total offense and 20th in total defense.

Dak Prescott is enjoying a good sesaon, with 25 touchdowns and 10 interceptions, but the real star is linebacker/defensive end Micah Parsons, a rookie out of Penn State. Parsons has 12 sacks, three forced fumbles and 17 tackles for loss this season as he campaigns to become the first rookie to win NFL Defensive Player of the Year since Lawrence Taylor.

10:39 p.m.: DALLAS TOUCHDOWN. Washington tries to punt it away out of the end zone but it’s blocked, recovered by Dallas and taken in for the score. Dallas 49, Washington 7 with 6:06 left in the third.

10:35 p.m.: Heinicke is sacked for a loss of eight. Now second-and-18 from the Washington 7 for the Football Team.

10:32 p.m.: Dallas punts it away now as the Cowboys get up to their 23 but can’t capitalize. Washington takes over at its 15 following a 62-yard punt.

10:27 p.m.: The two teams trade three-and-outs as Washington punts it away and Dallas takes over at its own 6.

10:22 p.m.: On third-and-17, Dallas punts it away for the first time since its opening drive. Washington takes back over from its own 30.

10:17 p.m.: The Washington Football Team’s opening third quarter drive stalls and they quickly go three-and-out after failing to move the ball at all. Dallas takes over at its 22.

9:58 p.m.: TOUCHDOWN DALLAS. Prescott hits Amari Cooper for 13 yards and the score as Dallas’ rout continues. Dallas 42, Washington 7 with five seconds left in the half.

9:55 p.m.: Dallas converts on fourth-and-2 as he finds Schultz again for 13 yards to the Washington 27. An unncessary roughness penalty against Washington moves Dallas up to the 14.

9:47 p.m.: On the third-and-9 play, Heinicke heaves it downfield to Terry McLaurin, who was looking for a PI call, but it doesn’t come. Washington instead punts it away and the Cowboys take over at their 11.

9:39 p.m.: TOUCHDOWN DALLAS. The Cowboys calling timeout pays off as offensive lineman Terence Steele is reported as an eligible receiver and comes up with the 1-yard touchdown. Dallas 35, Washington 7 with 2:31 left in the second.

9:31 p.m.: Back-to-back runs with Tony Pollard for 9 and 4 yards are followed up by a 25 yard pass from Prescott to Lamb down to the Washington 42. Prescott up over 200 yards already in the first half.

9:27 p.m.: Washington is set to punt it away again after their drive stalls. It goes into the end zone for a touchback and Dallas takes over at the 25 with just over six minutes left in the first half.

9:24 p.m.: Runs of 15 and 4 yards and Washington is now at its 40 following the touchdown. Looking to answer once again.

9:18 p.m.: TOUCHDOWN DALLAS. The Cowboys extend their lead after a Dak Prescott 13-yard run and 8 yard pass puts Dallas at the 11, where Ezekiel Elliott punches it in for the score. Dallas 28, Washington 7 with 10:34 left in the first half.

9:09 p.m.: TOUCHDOWN WASHINGTON. On third-and-goal, Heinicke hits Antonio Gibson out of the backfield for 8 yards and the score. Washington opens the quarter with points and is trying to claw its way back. Dallas 21, Washington 7 with 14:45 left in the first.

9:05 p.m.: The first quarter comes to a close with Dallas up 21-0 but Washington is in good position to answer. Looking at second-and-goal from the 8.

9:02 p.m.: Heinicke’s first pass following his second INT is a 48-yard strike to Dyami Brown into double coverage but Brown comes down with it. Washington now quickly at the Dallas 27.

8:57 p.m.: PICK-SIX DALLAS. On second-and-7 from their own 43, Heinicke is picked off yet again. This time it’s All-Pro defensive lineman DeMarcus Lawrence who picks it and takes it in for the score. It’s getting late early here in Arlington. Dallas 21, Washington 0 with 2:17 left in the first.

8:54 p.m.: Dallas’ kick following the TD goes out of bounds. Washington starts this drive at its own 40.

8:51 p.m.: TOUCHDOWN DALLAS. The Cowboys continue to score early, this time it’s Dalton Schulz for 10 yards and the touchdown. Dallas 14, Washington 0 with 3:08 left in the first.

8:49 p.m.: Prescott finds Lamb again, this time for a gain of 22. Dallas declines a penalty and it’s first-and-10 for the Cowboys from the Washington 22.

8:47 p.m.: Runs of 7 and 8 yards by Tony Pollard plus a 14-yard grab by Lamb and Dallas is now across midfield and marching quickly.

8:42 p.m.: Washington goes three-and-out on its second drive as Heinicke throws out of pressure on third-and-4. Washington punts it away and Dallas takes over at its 26 following a nice return by CeeDee Lamb.

8:40 p.m.: Washington’s second drive is going better than its first. On second-and-10, Taylor Heinicke hits Dax Milne for 14 yards to the Washington 39.

8:35 p.m.: TOUCHDOWN DALLAS. Ezekiel Elliott hauls it in out of the backfield and into the end zone. Caps off a nine-play, 71-yard drive and Dallas opens the scoring. Cowboys 7, Washington 0 with 7:42 left in the first.

8:30 p.m.: INTERCEPTION DALLAS. On Washington’s first offensive play of the game, Taylor Heinicke is picked off on a play-action pass by Trevon Diggs and the Cowboys take back over immediately. FIrst-and-10 at the Dallas 29 for the Cowboys.

8:26 p.m.: On third-and-16, Dallas tries some trickery involving laterals, but it doesn’t work and goes for a loss of 1. Dallas punts it away and Washington starts the game at its own 28.

8:22 p.m.: Washington wins the coin toss and defers. The opening kick goes for a touchback and Dallas starts the game at its own 25.

Cowboys vs. Washington is scheduled to start at 8:20 p.m. ET on Sunday. Jerryworld will play host to this game, as “Sunday Night Football” kicks off at AT&T Stadium.

What channel is Cowboys vs. Washington on today?

Cowboys vs. Washington will be broadcast nationally on NBC for “Sunday Night Football” in Week 16. The game will be called by Al Michaels and Cris Collinsworth, with Michelle Tafoya on the sideline.

In Canada, viewers can watch Cowboys vs. Washington with a subscription to DAZN, which includes every NFL game.