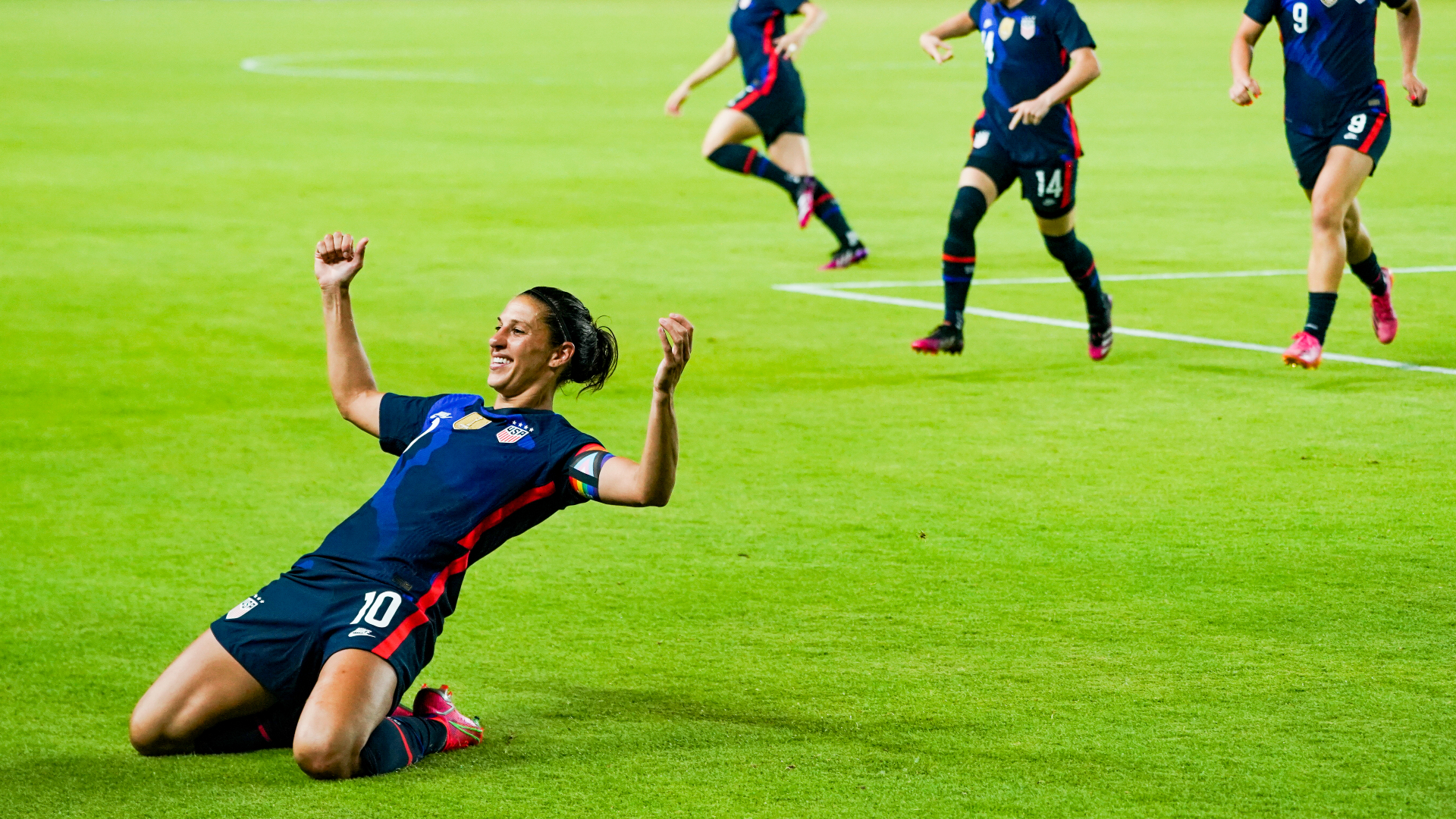 It couldn’t have been a better start, as Carli Lloyd scored just 24 seconds in and Lindsey Horan’s goal from the spot six minutes later meant Jamaica went into damage-control mode early. U.S. coach Vlatko Andonovski got plenty to think about as some of his bubble players shined in Houston, but he also got a scare as Rose Lavelle had to be removed in the first half with an injury.

The U.S. didn’t score between the 22nd minute and second-half stoppage time but continued to dominate throughout. Here are three observations from the team’s penultimate match in its three June friendlies.

Lloyd makes history — and her case

Lloyd is something of a conundrum for Andonovski. She’s made it clear in the past she’s not happy with a bench role but isn’t likely to start much if she makes the Olympic squad.

But Lloyd has the experience and big-game pedigree in her past and she still offers plenty of goals in the present. Her opener 24 seconds in against Jamaica was the second-fastest goal in USWNT history and at age 38 years 332 days, she’s now the oldest USWNT player to score a goal.

“Being old is not so bad after all,” Lloyd said on Fox Sports after the game. “For me it’s just about grinding away, being better. It’s a cool record to have.”

Lloyd nearly scored again minutes after her opener and was active and dangerous throughout the first half before she was replaced at halftime.

Andonovski has plenty of options in attack if he opts not to bring Lloyd to Tokyo, meaning she’s far from a lock despite her strong showing Sunday. But against Jamaica, Lloyd made the most of her chance.

Lavelle goes down in the first half

Lavelle went down injured midway through the first half when she appeared to overextend herself as she was dribbling the ball.

Lavelle attempted to play on, but she was unable to continue and was replaced by Sam Mewis.

The issue did appear minor and Lavelle walked off the field under her own power. After the game, Andonovski said that it was actually Lavelle who made the decision to come off as a precation.

“Rose rolled her ankle slightly and she first wanted to go a little bit more, and it was her decision to come off, which I’m very proud of,” Andonovski said. “In the past Rose usually would play 90 minutes, but she felt like it was best to pull herself out.”

But any injury concern to the team’s key playmaker this close to the Olympics isn’t ideal for the USWNT, particularly for a player with the injury history of Lavelle.

Lloyd wasn’t the only player on the Olympic roster bubble to turn in a strong display against the Jamaicans on Sunday, as Emily Sonnett and Midge Purce also caught the eye.

Purce, who usually plays outside back for the USWNT, played her more natural attacking position and scored a first-half goal before being moved back to defense for the second half.

Sonnett also demonstrated her versatility by putting in a solid two-way shift at both right back and left back.

But it’s not exactly clear how much stock Andonovski should put in his players’ performance against Jamaica. The Caribbean nation isn’t close to the USWNT’s level and the coach will likely learn way more about his players by watching them train against each other over two weeks than a friendly like Sunday’s.