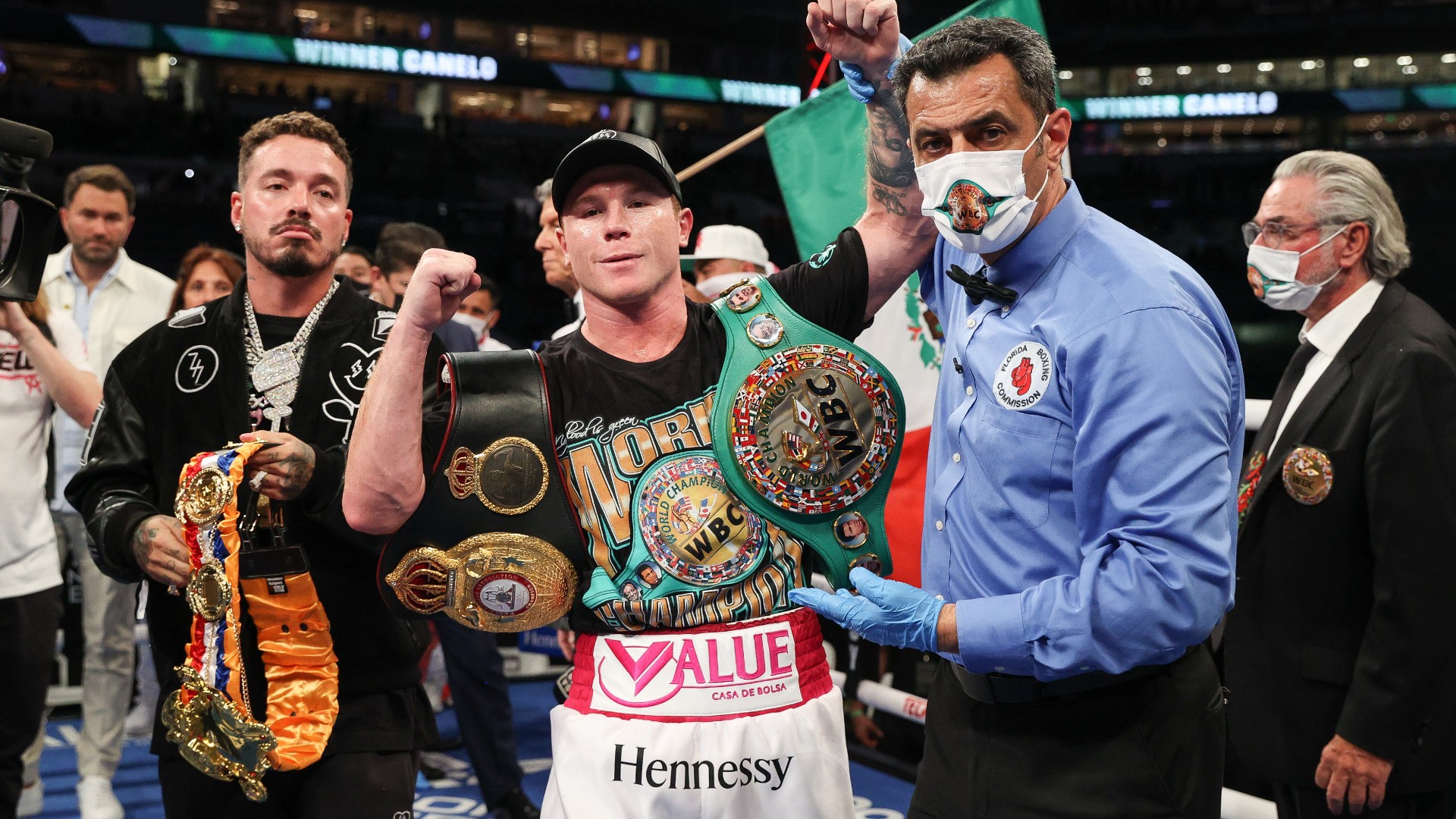 As expected, this was light work for Saul “Canelo” Alvarez.

The WBA (Super), WBC and The Ring super middleweight champion successfully defended his titles by pounding on Avni Yildirim and forcing his opponent to quit on the stool after three rounds at Hard Rock Stadium in Miami Gardens, Fla., on Saturday night.

Now it’s on to a unification fight against WBO champion Billy Joe Saunders on May 8.

This was a 70-day turnaround for Canelo after his thumping of Callum Smith in December where he claimed the super middleweight titles. In order to hold onto his WBC title, he needed to face the No. 1 contender in Yildirim. With dreams of being the undisputed champion, he fulfilled his obligation in a violent fashion.

“I needed the knockout and that’s exactly what I did,” Canelo said.

To say that it was an easy night for the 30-year-old might be selling it short. Canelo came out firing and Yildirim could do nothing more than eat leather as he felt the Mexican’s wrath.

Recognizing that Yildirim had no answers, Canelo went to work and pursued a finish to start the second round. Digging shots to the body, landing uppercuts and wrapping hooks around the gloves, Canelo scored his first knockdown with a right hand down the middle in the third round. It was clear that Yildirim had no chance as Canelo pummeled his opponent. Trainer Joel Diaz didn’t like what he saw from his fighter and decided to keep Yildirim on the stool for the fourth round.

The expected easy victory clears a path for Canelo to further unify the division.

“I’ll fight anyone,” he said. “I always fight the best. It doesn’t matter. Here I am, making history. I had to fight Yildirim in order to keep my championship.”

Here’s how it all went down. (All times Eastern.)

MORE: Join DAZN to watch Canelo and other fighters

Round 3 (10:54 p.m.): The third round begins where the second left off as Canelo repeatedly lands to the body and drops Yildirim with a straight right hand. Yildirim is up but getting pulverized. Canelo looking for the perfect shot to end this. Yildirim manages to survive but it’s obvious that this will be over soon. 10-8, Canelo (30-26, Canelo)

Round 2 (10:50 p.m.): Canelo rocks Yildirim with an uppercut and lands a hook. Canelo is just firing and landing whatever he wants. This is target practice. Canelo with a liver shot, uppercut and hook. This is abusive. Yildirim is nothing more than a heavy bag with legs. 10-9, Canelo (20-18, Canelo)

Round 1 (10:45 p.m.): Canelo opens with a left hook that moves Yildirim. He’s wasting little time going on the offensive. Canelo is digging to the body. Yildirim has no answers already. As a fighter known to be aggressive, Canelo has tamed the Turkish warrior. 10-9, Canelo

10:34 p.m.: Canelo is heading to the ring with a performance from pop star J Balvin. Dancers and pyro set the stage for boxing’s pound-for-pound king.

10:30 p.m.: Avni Yildirim has made his way to the ring. He says that Canelo has never fought a Turkish warrior before. Not sure if that will matter but it sounds good.

10:24 p.m.: We have become accustomed to long waits whenever Canelo fights. After over 30 minutes, we’re finally at the national anthems. The main event is (finally) upon us!

9:50 p.m.: It’s time for the main event! Canelo Alvarez is set to defend his WBC, WBA (Super) and The Ring super middleweight titles against WBC No. 1 contender Avni Yildirim. Few expect Yildirim to be much of a threat but anything can happen. Right?

9:43 p.m.: McWilliams Arroyo has claimed the interim WBC title with a fifth-round stoppage. Rodriguez simply couldn’t take the pressure and was getting pummeled from pillar to post. With no conceivable way to win, Rodriguez’s corner stopped the fight to save their fighter from further damage. We’ll get the Arroyo-Julio Cesar Martinez fight as soon as Martinez heals.

9:40 p.m.: As expected, this fight was one-way traffic. It took a minute for Arroyo to figure out Rodriguez but cranked up the pressure in the fourth round to score his first knockdown. Rodriguez is going to need to do something special to avoid getting stopped in the fifth.

9:16 p.m.: The co-main event is up next as McWilliams Arroyo will battle late replacement Abraham Rodriguez for the interim WBC flyweight title. Julio Cesar Martinez broke his hand earlier in the week and Rodriguez flew to Miami on Friday to take his place. Arroyo is fully expected to win but Rodriguez should be commended for stepping up at the last minute.

9:10 p.m.: The hype train for Zhang Zhilei has been derailed as he ends up with a majority draw against Jerry Forrest despite scoring knockdowns in the first three rounds. But the big man was exhausted and allowed Forrest to take over for the second half of the fight. A docked point in the 9th round ended up being the difference-maker with one judge seeing it for Forrest 95-93 and the other two judges having it even at 93-93. Zhang will certainly need to go back to the drawing board and figure out what went wrong.

9:07 p.m.: The fight has certainly turned around as Zhang has done next to nothing during the second half of the fight and lost a point in the 9th round while Forrest continues to outwork him. Forrest buzzes Zhang late in the 10th with a combination and has the big man hurt. Zhang is stumbling around the ring with Forrest giving chase. Zhang manages to survive but could we have an upset on our hands?

8:51 p.m.: Zhang dropped Forrest once in the first three rounds but Forrest refuses to go away. He’s clearly being outgunned throughout and continues to press forward. As we close out the sixth round it appears that Zhang is completely gassed out. Maybe Forrest can mount a comeback?

8:22 p.m.: The heavyweights are about to throw hands next with the gigantic 6-6 Chinese monster Zhang Zhilei taking on Jerry Forrest. Can Zhilei collect his 23rd victory?

8:09 p.m.: Well, he didn’t get the knockout but Diego Pacheco improved to 11-0 and went eight rounds for the first time in his career with a unanimous decision victory. Pacheco controlled much of the action and appeared to learn a lot as he begins his climb into title contention by facing an opponent who had never been stopped before. It wasn’t easy but it was definitive for Pacheco.

7:51 p.m.: We’re midway through the fight and both are still upright. Pacheco is ahead but Gomez Jr. has absolutely come to fight. It’s Pacheco’s activity behind the jab that was done the job thus far. Can Gomez figure out a way to turn this fight around?

7:30 p.m.: Up next is another young rising talent as Diego Pacheco looks to remain undefeated against Rodolfo Gomez Jr. Pacheco’s height advantage will be nullified here as both are towering at 6’4″ and share a similar reach. They have both promised short nights. But who will be on the canvas?

7:24 p.m.: We’re live and it didn’t take long for hot prospect Marc Castro to make his presence felt. Facing former UFC flyweight title challenger John Moraga, Castro made sure there would be no Clay Collard kind of rise from the former MMA fighter as he dropped his opponent three times in two rounds to get the stoppage. Castro dropped Moraga with the first jab he threw and it was all downhill from there. A combination dropped Moraga again in the second round and finished him off with a short uppercut. Castro improves to 2-0 and it’s obvious that he’s going to be challenging for a world title in the next 24 months.

How to watch Canelo vs. Yildirim

The Canelo vs. Yildirim fight will stream live globally on DAZN to more than 200 countries and territories, including the U.S. and Canada.

Those interested in watching the fight can find DAZN on a number of different systems, including, but not limited to, Amazon Fire TV/stick, Android, Apple TV, Google Chromecast, iPhone and iPad, Playstation 4, Playstation 5, Xbox One, Xbox Series X/S and Roku. The DAZN app is also available on LG, Samsung and Vizio smart TVs, Xfinity X1 and Flex.

Viewers can also find it on DAZN.com using browsers like Chrome, Firefox, Internet Explorer and Safari.