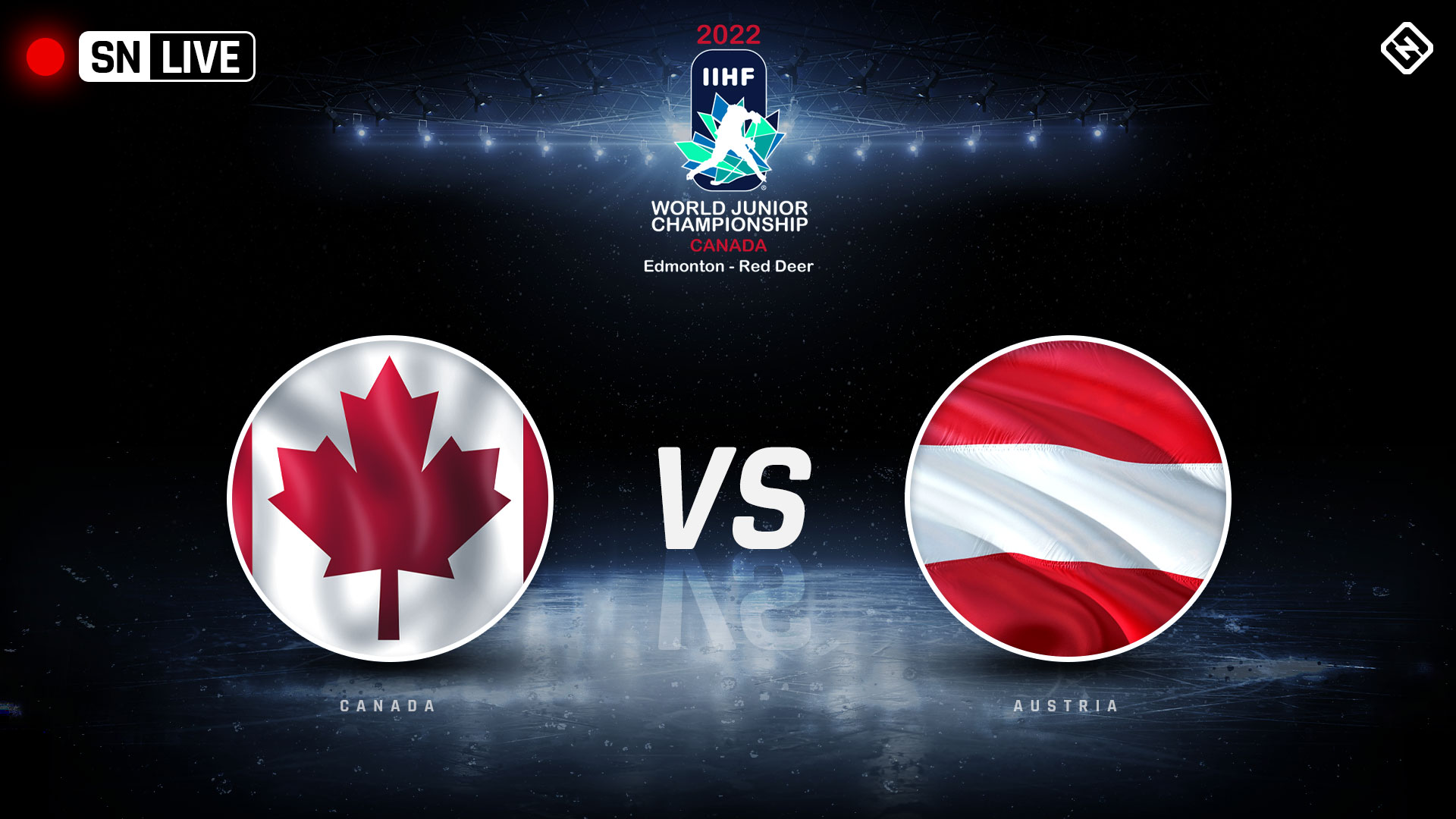 The last time that Team Austria and Team Canada met in the World Juniors was in 1981, when the Canadians managed double-digit goals in a big win over the Austrians. Three decades later, history repeated itself, and more history was made as Connor Bedard’s four goals powered Team Canada to a dominant 11-2 victory on Tuesday. They are now 2-0 to open their 2022 World Juniors run.

Bedard, 16, became the youngest player to score a natural hat trick in World Juniors history and also tied Team Canada’s single-game record for goals with four strikes on the night. Meanwhile, Mason McTavish also put up a multi-goal game with back-to-back strikes in the third period and picked up an assist, while Cole Perfetti also picked up a goal and two helpers for three points of his own. Overall, 16 Canadians got on the scoresheet against the Austrians, and Brett Brochu also had a solid game with 20 saves for a .909 save percentage in his debut.

There was a silver lining for Team Austria though, as they got goals from Lukas Necesany and Mathias Bohm to surpass their goal total from last year’s World Juniors run.

Sporting News covered all the action live from Rogers Place as Canada hit double digits and outshot Austria 64-22 in an impressive all-around showing.

9:36 p.m. ET – END OF REGULATION: Four goals from Connor Bedard and three-point outings for Cole Perfetti and Mason McTavish lead Canada to a dominant 11-2 victory over Austria. They advance to 2-0 to open their World Juniors run.

9:24 p.m. ET – Mathias Bohm picks up a rebound and puts it past Brett Brochu to give Austria another goal late against Canada. It’s 11-2.

9:20 p.m. ET – Canada will head to the penalty kill for the first time with Carson Lambos heading off for cross-checking.

9:13 p.m. ET – GOAL: Mavrik Bourque gets his first goal of the tournament, putting a great pass from Cole Perfetti off a defender’s stick to make it 11-1.

9:08 p.m. ET – GOAL: Ronan Seeley’s initial shot is stopped, but Mason McTavish is in front to pick up the rebound and second of the game to give Team Canada its 10th goal of the night. It’s 10-1 with just over 14 minutes left in regulation.

9:06 p.m. ET – GOAL: Mason McTavish picks up a pass from Dylan Guenther and rips a sharp-angle shot past Leon Sommer to make it 9-1. That’s his second goal of the tournament and the Canadians third goal in less than five minutes to open the third.

9:03 p.m. ET – GOAL: Connor Bedard tips in a shot from Will Cuylle for his fourth goal of the game, tying Team Canada’s single-game record after becoming the youngest player in World Juniors history to record a natural hat trick. It’s 8-1 for the Canadians.

9:02 p.m. ET – The Austrians get a clear chance on a breakaway but it goes wide.

8:59 p.m. ET – Cole Perfetti picks up the loose puck in front off an Austria turnover and rockets a quick shot from the slot past Leon Sommer to make it 7-1 just 27 seconds into the final frame.

8:39 p.m. ET – GOAL – Team Austria gets on the board after Lukas Necesany catches Brett Brochu far out of his crease after colliding with Kaiden Guhle in pursuit of a loose puck. It’s 6-1 with 30 seconds remaining in the second. The Austrians have now surpassed their goal total from last year’s World Juniors run.

8:33 p.m. ET – Logan Stankoven has another great look and almost gets his second of the game, but it rings off the crossbar. This is at least the third time Canada has hit a post or crossbar this game.

8:28 p.m. ET – Team Canada will head to its fourth power play of the night with Tobias Sablattnig heading off for boarding Dylan Guenther.

8:14 p.m. ET – GOAL: Connor Bedard gets the puck off the face-off and makes a great deke before firing the puck top shelf for the natural hat trick. Team Canada now has hat tricks from two different players (Bedard and Owen Power) in the first two games of the 2022 World Juniors. It’s 6-0 for the Canadians with 13:47 to go in the second period.

8:12 p.m. ET – The Canadians are absolutely swarming. Mason McTavish gets a clear-cut chance in front but it rings off the post. Still 5-0.

8:11 p.m. ET – Donovan Sebrango makes a brilliant stretch pass up to Ridly Greig for a breakaway chance but it goes wide.

8:10 p.m. ET – Team Canada can’t convert on the man advantage, and it remains 5-0. The Canadians are 2-for-3 so far tonight and have five PPGs so far this tournament.

8:06 p.m. ET – The Canadians will go on their third power play of the night after Jake Neighbours draws a holding call on Lucas Thaler.

8:05 p.m. ET – The second period is underway, with Canada leading Austria 5-0 after an eventful opening frame. Fourteen different Canadians have found the scoresheet tonight. Also, Team Canada has as many goals from the blue line through two games so far as they had all last tournament.

7:39 p.m. ET – GOAL: Connor Bedard forces a turnover in the neutral zone and goes on a give-and-go with Will Cuylle before burying a return pass to make it 5-0 for Team Canada in the opening frame. That’s Bedard’s second goal of the night thanks to back-to-back tallies in under two minutes.

7:37 p.m. ET – GOAL: Connor Bedard gets his first World Juniors goal in the final seconds of the power play, picking up his own rebound off a bang-bang play in front. It’s 4-0 for the Canadians with under five minutes to go in the first.

7:35 p.m. ET – Despite the scoreboard, Leon Sommer has been excellent for Team Austria so far. Has come up with quite a few big saves for the Austrians already.

7:34 p.m. ET – Team Canada will head to the power play as Tobias Sablattnig will head off for hooking.

7:23 p.m. ET – GOAL: Logan Stankoven picks up a pass from Mason McTavish, charges into the offensive zone and fires an absolute rocket past Leon Sommer to make it 3-0 for Team Canada.

7:19 p.m. ET – GOAL: Lukas Cormier walks the line and then closes in on net before beating Leon Sommer glove-side to make it 2-0 for Team Canada early.

7:17 p.m. ET – GOAL: Kent Johnson finishes off a great tic-tac-toe passing play from Cole Perfetti and Owen Power with a one-timer to get Canada a power-play goal early. It’s 1-0 for the Canadians.

7:16 p.m. ET – The Canadians will head to the power play as Mason McTavish draws a hooking penalty on Johannes Tschurnig.

7:15 p.m. ET – Team Canada is swarming so far with eight shots in the first 3:56 minutes of play here in Edmonton. The Austrians have just two shots on goal so far.

7:12 p.m. ET – Brett Brochu gets a nice glove save in early on after Kilian Rappold got a clean shot on net following a turnover in the defensive zone. It’s still scoreless in the first three minutes.

7:10 p.m. ET – The puck is dropped and action is underway from Rogers Place. This is the first time since 1981 that Canada and Austria are playing each other at World Juniors.

6 p.m. ET – Team Canada reveals its line combinations for its Tuesday tilt against Austria. Mavrik Bourque gets a promotion to the top line with Xavier Bourgault injured, Connor Bedard starts things off on the fourth combination and Brett Brochu will play in his first game of the tournament for the Canadians.

The puck drops at 7 p.m. ET from Rogers Place in Edmonton, Alberta, home of the Edmonton Oilers.

TSN has all the World Juniors action in Canada. Gord Miller will provide the play-by-play commentary, with Ray Ferraro joining as an analyst for al of Canada’s Group A games.

In the United States, viewers can find the games on the NHL Network.

Canada is a heavy 8.5-goal betting favorite to beat Austria in their preliminary game, according to Sports Interaction.