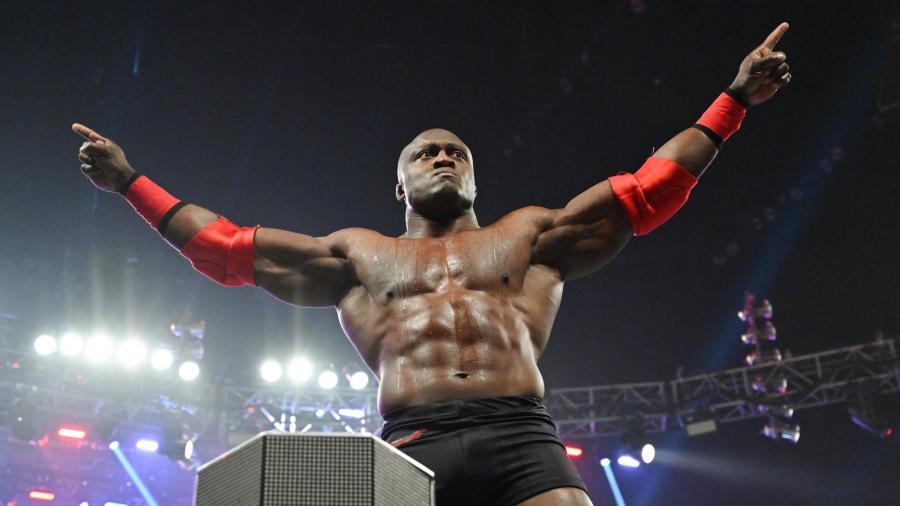 At this time last year, Bobby Lashley was wrapping up an angle that found him in a romantic situation with Rusev’s wife Lana. Many collectively groaned at what we thought to be an odd use of a WWE Superstar who has always been viewed as the ultimate wrecking machine. However, the levity of that angle eventually helped push Lashley into the position that he has currently as the United States champion and part of one of the most well-established factions in recent memory alongside MVP, Shelton Benjamin and Cedric Alexander — collectively known as The Hurt Business.

As Lashley prepares to defend his U.S. title at Elimination Chamber (Sunday, Feb. 21 at 7 pm E.T. on the WWE Network) against Keith Lee and Riddle in a triple threat match, the muscle of The Hurt Business talked with Sporting News to explain why his faction is nothing like The Nation of Domination, what it’s like working with MVP again and the idea of an all or nothing title match at WrestleMania, where The Hurt Business would put its Raw tag team titles and the United States championship on the line against The New Day with Intercontinental champion Big E.

Sporting News: You and MVP have a history together outside of WWE. What is it like being back together at this stage of your respective careers as The Hurt Business?

Bobby Lashley: It’s a blast, man. Probably one of my favorite times in my entire career because this is real. There have been angles before that people don’t believe but this one is authentic. MVP, Shelton and Cedric flew into Denver, where I’m at, just to see my suit guy. It’s freezing out here! But they wanted to come out here and hang out. Wrestlers don’t normally do this. These are my friends. I’ve known MVP for maybe 18 years now. I knew Sheldon in college when we wrestled against each other. We all see ourselves in Cedric and we have a lot of knowledge we are passing along to him.

One time, Cedric came into the building and he had his suit on a hanger.  MVP stopped him and asked why his suit was on a hanger. He needed to put it on because the suit is what we are about. It’s not a character we just do on TV. It’s who we are. We are professionals.

SN: When the faction first came together, people immediately thought this was the second coming of the Nation of Domination. What were your thoughts when hearing that?

BL: My first thought was, “Thank you!” But that’s not who we were. Because you see a group of Black guys, some people immediately associate them with another group of Black guys. I love what The Nation did but that’s not what we’re about at all. But we are totally different. It’s not about black and white; we are about green and gold. We are thugs in suits because we have a hardcore style but want to look good doing it. We wanted to show a different representation of Black men because we haven’t seen that. We are four professional Black men who can mess you up. That’s what we’re all about.

SN: When you mention amateur wrestling, what happened where you had to make a career change?

BL: I was in a bank that got robbed and I had to dive for cover to avoid the gunfire and split my knee.

Wrestling is crazy after college because what are you going to do afterward? Even if you go to the Olympics, you are looking at a lot of dedication for no money. That injury forced me out of even trying out. And with the Olympics being every four years, do I put myself on the shelf for another four years? That was a pivotal decision for me. Did I want to put myself through all that? At some point, you have to start life. I was fortunate enough to not even have to make that decision because I got an offer that was way greater than anything else when the WWE called me. When one door closed, another one opened. This was me being able to train for my Olympic gold medal by performing every single day.

SN: Do you believe that your fate as a pro wrestler was preordained?

BL: Absolutely. And that’s why when you see me outside of the ring — where I’m always in “Kill Mode” — I’m never in a bad mood. I enjoy everything. I’ve had some really embarrassing things happen to me on TV but I was able to laugh at myself. The critics say what they say and I’m laughing right with them because I would have laughed at me too. I’m too high on the positives to think about the negatives.

SN: When you talk about embarrassing, you must be talking about your love triangle with Lana and Rusev. What were your thoughts on being in that angle?

BL: It happened so quick. When I was introduced to it, I was told what to do and … (groans). I didn’t understand the magnitude of it. But the one thing I did know was that I was doing something different. And you can say whatever you want about Lana but she was 100 percent committed and invested in that character. I felt awkward doing it. I’m always in fight mode but it was good to pull me out of that mode. But I needed to relax and just have fun with it. I loosened up because I knew we were trying to entertain people. I understood that, even though I didn’t originally like the idea and ended up being cool with it. It’s not comfortable for me but I understood the lesson I was being taught.

SN: After this angle, The Hurt Business begins forming when MVP shows up at the Royal Rumble. Did you know when he returned to WWE that you two would be working again?

BL: Yeah, because I told him we would be. At first, it went in one ear and out the other but he was listening. He’s like a mixture between The Rock, Don King and Suge Knight. I wanted him back here so we could run together and then we started putting it together. Mentally, I thought about this for years if and when he stepped back through those WWE doors again. It eventually turned into The Hurt Business and we had the components with Shelton and Cedric. Sometimes you have to believe in somebody else’s belief in you and that’s where MVP as a mouthpiece comes into play. He’s our advocate because there’s no question that any one of us could run on top of this company. We just needed somebody to tell everyone else.

SN: You have a match at Elimination Chamber against Riddle and Keith Lee, who are two Superstars that can be considered the future of WWE. They also have remnants of you in their style. How exciting is it for you to be a part of this match?

BL: The future is bright. Both of those guys have the potential to do some great things in this business. But that’s after I retire, of course. They have great matches but I’m not trying to have a great match. I’m trying to beat them up. I’m going to grab Riddle and beat Keith Lee with him.

SN: WrestleMania is coming up. Is there a match with someone that you haven’t had yet — who would it be against and why?

BL: It would be a clone of myself (laughs). There are so many different people. It really depends on what the fans want. If you want a fight, give me Brock Lesnar. If it’s a street fight, I’ll face Drew McIntyre. If you want to find out who the biggest dog on the block is, I’ll take Roman Reigns. If you want a trainwreck, let’s go with Braun Strowman. And if you want a technical match, I’ll get down with AJ Styles and Seth Rollins. I can’t pick one person. It just depends on what kind of match is needed at that moment.

SN: At the Royal Rumble, you and Big E had a moment. People realized that you two have never interacted in the ring. Social media was buzzing at the possibility. Obviously, you two are champions on two different shows, but would you be interested in a title vs. title match at WrestleMania?

BL: You know, it would be great to have two titles. Me and Big E have purposefully stayed away from each other for so long, but I don’t think we can do this much longer. One reason is because we have the Raw tag team titles and I know The New Day wants them back. So if Kofi Kingston and Xavier Woods come after us and Big E finds a way to involve himself, now it’s The Hurt Business vs. The New Day. We’ve never seen that match.

SN: You’re in great shape as a 44-year-old but do you put a time limit on when you’ll decide to call it a career?

BL: I still have a good amount of years left on my contract but it’s one of those things where you see guys who have fought for too long and begin to fall off. But I tell those close to me that if you see me slowing down and collecting extra pudge on my body, pull me aside and tell me. Sometimes we don’t want to be honest with ourselves. Right now, I feel invincible. But if somebody tells me I’m slowing down I’ll take a look at myself. But, if I had to guess, I’ve got five years left.