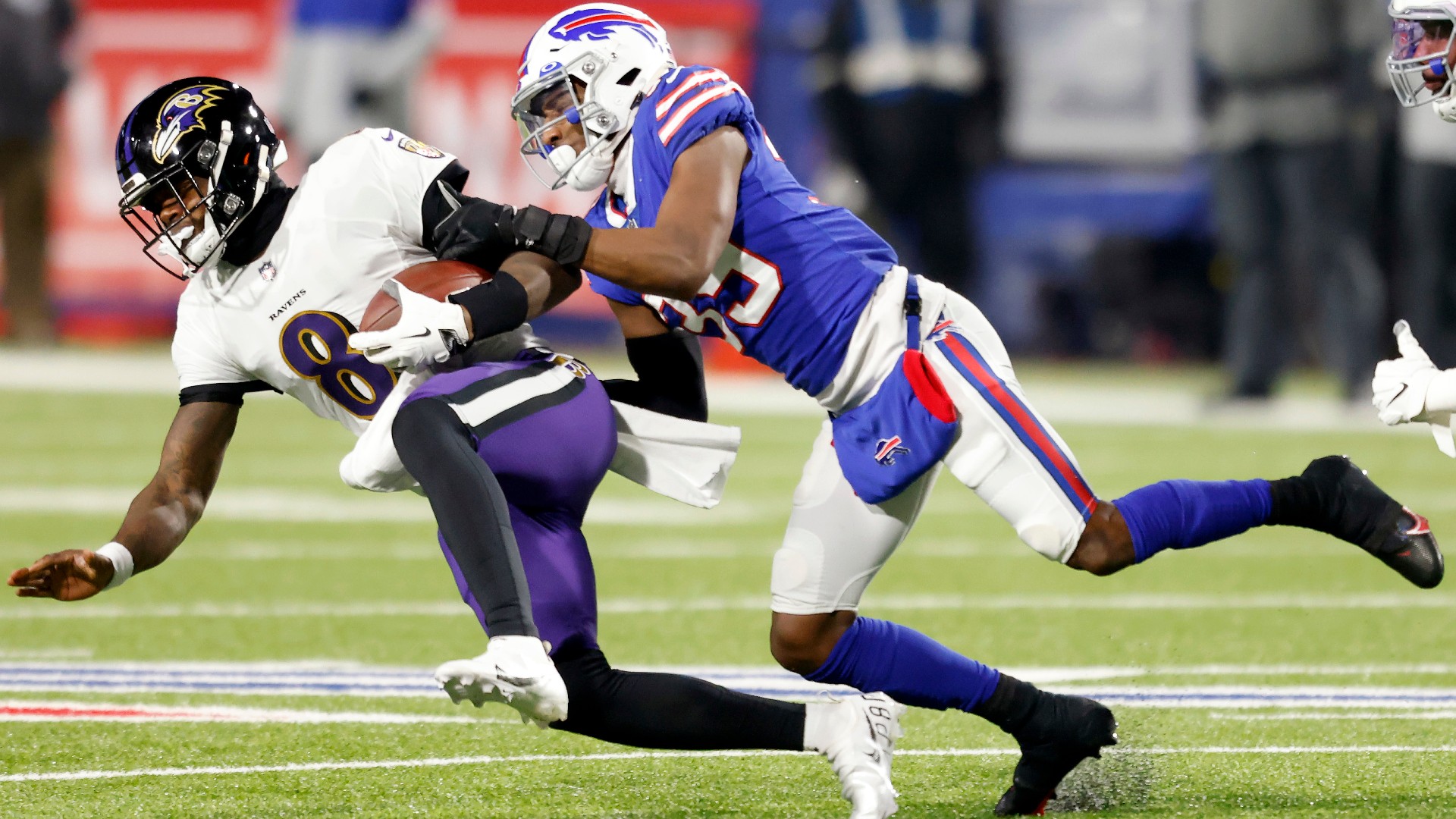 Lamar Jackson spent the final quarter of his season in the Ravens’ locker room under the direction of medical personnel, likely watching Buffalo finish its 17-3 divisional round playoff win over his team on a TV tucked inside Bills Stadium.

He was knocked out of the game when his head bounced against the turf at the end of a broken play in the final seconds of the third period. Just two snaps before that, he had thrown a 101-yard pick-six.

The Bills held Baltimore to its lowest point total since 2009, disrupting drives with pressure in the backfield and sturdy coverage. But the Ravens also hurt themselves in myriad ways. Jackson was injured following his center’s third errant snap of the contest — when he picked up the loose ball, he lost balance trying throw and couldn’t cushion his fall. His receivers struggled to hold onto passes. His offensive linemen committed too many penalties. His kicker clanged two field goal attempts off the uprights. And his own reads from the pocket were often abysmal.

Buffalo, while not exactly sharp in its own right, fed off a loud limited-capacity crowd to capitalize on Baltimore’s struggles. Josh Allen was 23-of-37 passing for just 206 yards, but he didn’t turn the ball over. The Bills’ defense allowed long drives, but the group buckled down when backed inside its territory.

As a result, Allen will lead the franchise to its first AFC championship appearance since the 1993 season. Jackson, who left having accounted for fewer than 200 all-purpose yards, must wait at least another year to bring his city the Super Bowl trophy he promised on his draft night.

Sporting News tracked all of the action, providing live commentary and highlights. Follow along below to relive how Buffalo advanced to the AFC title game, where it will meet the winner of Chiefs vs. Browns.

11:14 p.m.: A running into the punter call against the Ravens officially ends this one. The Bills can kneel the rest of the time out.

11:07 p.m.: A fourth-and-goal pass to Mark Andrews is broken up. Buffalo takes over possession.

10:50 p.m.: Oh man. Huntley had Brown wide open behind the secondary on fourth-and-8. A completion would have given the Ravens life. Now it’s probably game-over.

10:38 p.m.: The Ravens punt. Jackson, meanwhile, is in concussion protocol.

10:31 p.m.: Lots to unpack there. Snap got past Jackson, who in a panic after retrieving it tried to throw the ball away while falling backward into the end zone. He was flagged for intentional grounding, but the bigger concern is Jackson staying down.

10:21 p.m.: Dobbins pushes to the 10-yard line as the Ravens’ long drive continues. Baltimore has snapped 11 times already this possession, equalling what Buffalo managed to start the quarter.

10:08 p.m.: TOUCHDOWN, Bills. Diggs uses his quickness to snake into the end zone from a rapid snap-and-throw action. That’s his sixth catch of the night. 10-3, Buffalo.

10:07 p.m.: Singletary then shows off his hands with a reception inside the 5.

10:05 p.m.: Bills running back Devin Singletary, who has been quiet to this point, pushes the pile into the red zone.

10 p.m.: The second half is underway. Bills start with a solid return from Andre Roberts.

9:45 p.m.: FIELD GOAL, Ravens. Tucker barely avoids hitting the upright for a third time. His successful kick ensures a tie entering the half. 3-3.

9:39 p.m.: Jackson to Brown for 30 yards. Looks like Tucker will get a field goal attempt before halftime.

9:22 p.m.: Jackson is still able to move the chains! He makes a risky but effective throw over the middle to Hollywood Brown.

9:18 p.m.: Jackson takes another long sack. This time he goes down 9 yards behind the line.

9:14 p.m.: Allen fumbles the ball, but one of his linemen falls on it. Still, the Bills are forced to punt.

9:12 p.m.: The duality of Allen is on full display right now. He makes a crazy pass to Brown after stumbling well behind the line of scrimmage, but on the next play, he has another head-scratching overthrow.

9:04 p.m.: Dobbins, who had a costly drop earlier, breaks into Buffalo territory by sneaking out of the backfield and making himself available for Jackson to find.

8:58 p.m.: Allen comes back with a great throw to John Brown, who keeps both feet in play long enough to secure a 21-yard reception.

8:45 p.m.: FIELD GOAL, Bills. Not a satisfying conclusion to that drive for Buffalo given its starting field position and Davis’ drop, but that kick is still enough for an early lead. 3-0, Buffalo.

8:42 p.m.: Allen sells a roughing the passer call and gets what he’s looking for. First-and-10 for Buffalo at the Baltimore 11-yard line after the flag.

8:38 p.m.: The Bills will have great field position after a terrible punt of just 23 yards.

8:37 p.m.: J.K. Dobbins drops a third-down pass that would have easily moved the chains. Now the Ravens punt.

8:34 p.m.: Buffalo asks Allen to throw deep, but his pass goes 10 yards deeper than his intended target. Punt coming up.

READ  Kyler Murray contract projection: How much will Cardinals need to pay QB in next deal?

8:31 p.m.: The Bills take a timeout to think about what they’ll run on third-and-6 from around midfield. They would love to keep their defense on the sidelines after Baltimore’s recent drive lasted than seven minutes.

8:25 p.m.: No good! The sack keeps Baltimore from threatening to move the chains, and kicker Justin Tucker clangs his 41-yard field goal attempt off the left upright.

8:22 p.m.: Ravens go for it on fourth-and-1 and get stuffed. But an offside call against the Bills gifts an automatic first down, negating what would have been a big defensive stand.

8:19 p.m.: Now it’s Lamar Jackson carrying for a first down. Baltimore, as usual, is emphasizing the run.

8:15 p.m.: The Ravens receive the opening kickoff, which sails through the back of the end zone for a touchback. We’re underway.

The Bills and Ravens will conclude the first of two days of divisional-round action. Packers vs. Rams takes place at 4:35 p.m. ET, and Bills vs. Ravens serves as the nightcap.

Prior to an afternoon start in the wild-card round, Buffalo had played four of its final five regular-season games at night, winning all of them, so this should be a comfortable start time for the Bills.