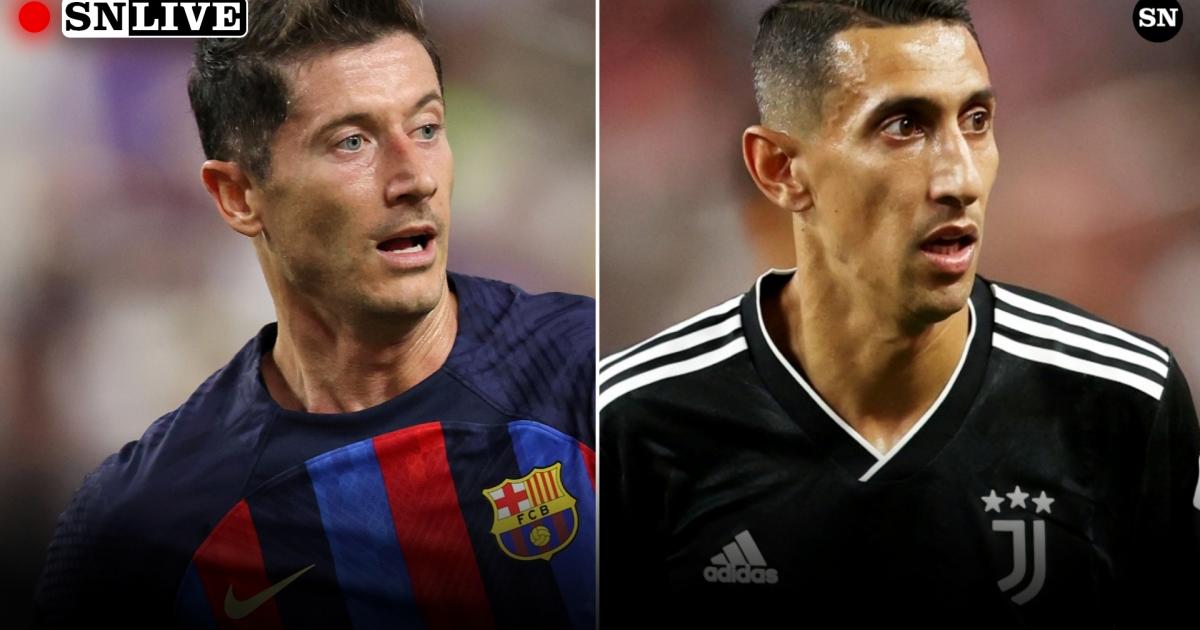 Two UEFA Champions League clubs looking forward to a return to glory in the 2022-23 season meet Tuesday when Barcelona and Juventus lock horns in Dallas.

New arrival Robert Lewandowski will be looking to score his first goal in a Barcelona shirt after being held scoreless during last weekend’s El Clasico triumph over Real Madrid. Barca walloped MLS side Inter Miami 6-0 to kick off its summer tuneups.

Juventus have played just one preseason friendly, against Chivas Guadalajara, coming away with a tidy 2-0 win, but a meniscus injury to star acquisition Paul Pogba has cast a shadow over preparations for the new campaign.

Both clubs are a couple of weeks away from kicking off official competition. Juventus will play both Madrid clubs next before opening their Italian Serie A campaign against Sassuolo on Aug. 15. Barcelona will play MLS’s NY Red Bulls and Mexican side Pumas UNAM ahead of their Spanish La Liga home opener against Rayo Vallecano on Aug. 13.

4th min.: Barcelona are already on top of the Italian side in the Juventus half and Ousmane Dembele fires the first shot of the match with a left-footed blast that was off target.

1st min.: Juventus kicks off the match. They’ll be wearing the black and white stripes, while Barcelona are in their gold kits.

5 mins from kickoff: Teams are coming onto the field. Leonardo Bonucci and Sergio Busquets are the captains.

60 mins from kickoff: Lineups are in. Dallas native Weston McKennie starts on the bench for Juventus together with Dusan Vlahovic, who has yet to appear in preseason.

75 mins from kickoff: The Cotton Bowl in Dallas has always been known for its pristine playing surface:

90 mins from kickoff: This could make for an interesting subplot in the match:

As it stands, Juventus are best-placed to offer a home to Memphis Depay.

The Dutch forward is surplus to requirements at Barcelona and Juventus want a second forward after Dusan Vlahovic. pic.twitter.com/JoUW93L9mG

120 mins from kickoff: How Juventus replaces Paul Pogba in midfield will be one of the storylines from this match for Juve supporters to watch:

Ousmane Dembele and Pierre-Emerick Aubameyang get the start on either side of Robert Lewandowski with Ansu Fati and Raphinha heading to the bench. New signing Franck Kessie also starts, and it will be interesting to see what manager Xavi Hernandez does with Frenkie de Jong amid constant rumors of a potential departure. Ronald Araujo and Pedri get the night off.

Dallas native Weston McKennie starts on the bench with Nicolo Ravella and Denis Zakaria partnering Manuel Locatelli in midfield with Paul Pogba (right meniscus) out. Summer signing Bremer gets his first start in central defense, while Dusan Vlahovic is expected to make his preseason bow in the second half. Expect the Under-23 players to get the bulk of the second-half minutes.

U.K.: Tuesday’s match between Barcelona and Juventus from the Cotton Bowl in Dallas will be televised in the United Kingdom by Premier Sports 1, and also available to stream on Premier Player HD.

Canada: DAZN will carry the match for fans in Canada.

Australia: Paramount+ will stream Barcelona vs. Juventus during the morning hours in Australia.