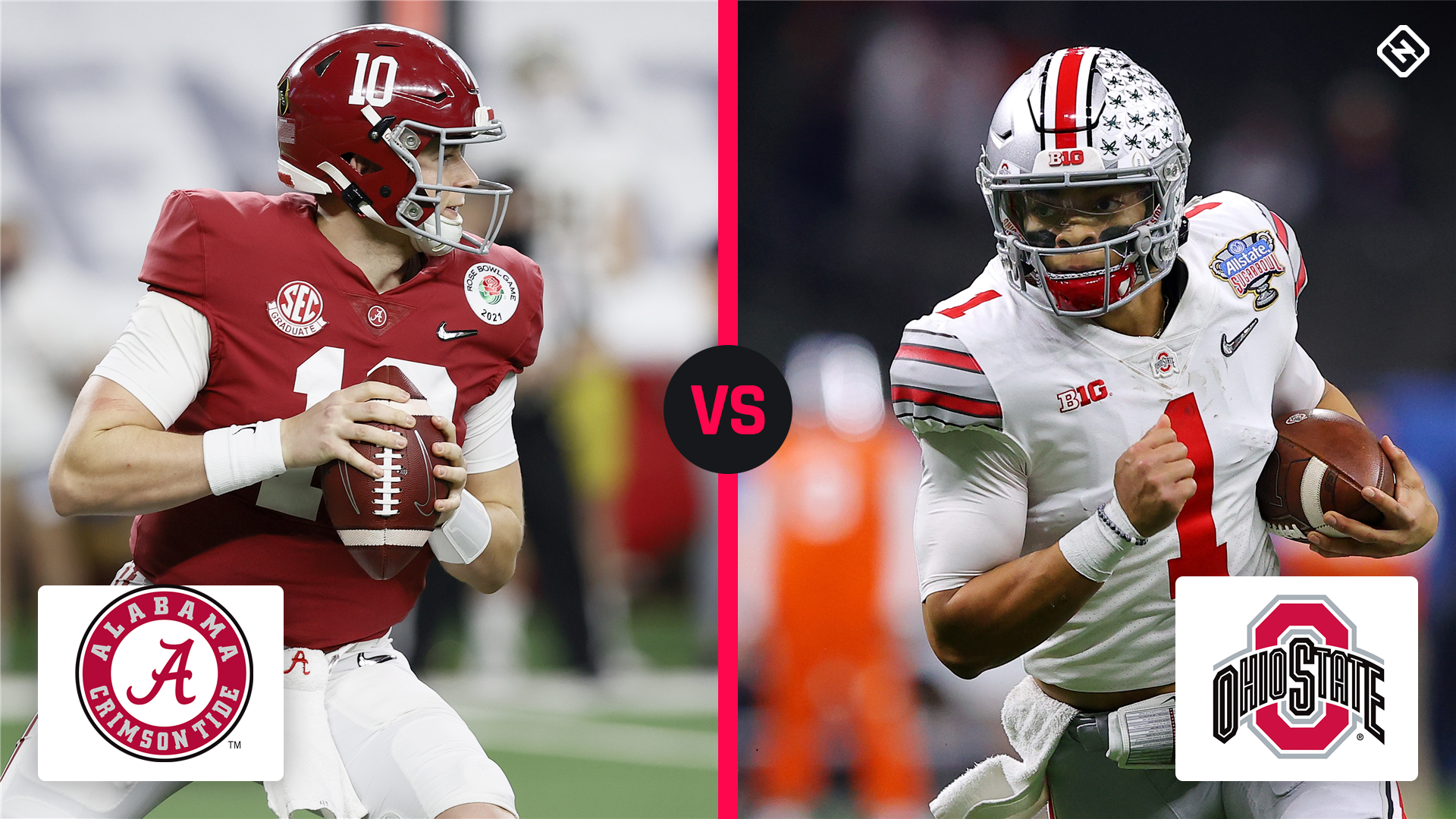 No. 1 Alabama and No. 3 Ohio State meet in the College Football Playoff championship game Monday in a classic blue-blood matchup.

The game is at Hard Rock Stadium in Miami Gardens, Fla. Kickoff is scheduled for 8 p.m. ET on ESPN.

Alabama (12-0) is in its fifth CFP championship game under Nick Saban after beating No. 4 Notre Dame 31-14 in the semifinals. The Crimson Tide are also looking for a sixth national championship under Saban, and the offense averages 48.2 points per game. DeVonta Smith, Mack Jones and Najee Harris lead that offense, which might get an extra lift with the potential return of Jaylen Waddle.

MORE: Alabama vs. Ohio State players in the NFL

Ohio State (7-0) answered any doubts about its playoff credentials with a 49-28 victory against No. 3 Clemson in the semifinals. Justin Fields is coming off a six-touchdown performance despite taking a nasty hit in the second quarter. Second-year coach Ryan Day expects Fields to play, and the running game has taken off with Oklahoma transfer Trey Sermon.

It’s trending toward a shootout and an instant classic.

Here’s everything to know about betting on Alabama vs. Ohio State, with updated odds, trends and our prediction for the CFP semifinal.

The Crimson Tide are in the CFP for the sixth time, and they are in the championship game for the fifth time. Alabama is 2-2 in those previous title games.

This is Ohio State’s fourth CFP appearance and second appearance in the championship game. The Buckeyes beat Oregon 42-20 on this stage in 2014.

— Alabama has been favored in all four previous CFP championship appearances. The Crimson Tide is 2-2 straight-up in those games, but they are 0-4 ATS.

— The Crimson Tide is 8-4 ATS this season, and that includes a 2-1 ATS mark when the spread is fewer than 20 points.

— The Buckeyes played the underdog card to perfection against Clemson, but that has been the standard with Urban Meyer and now Day as head coach. The Buckeyes are 8-1 ATS as an underdog since 2012.

— Justin Fields’ encore. Fields was spectacular against Clemson, even after taking a brutal hit from Clemson linebacker James Skalski. Fields threw three TDs to his receivers — including two to Chris Olave — but it was the three TD passes to tight ends Jeremy Ruckert and Luke Farrell that kept the Tigers off balance. Garrett Wilson figures to be more involved in this game, too. Alabama’s secondary features first-team All-American cornerback Patrick Surtain II, but that defense has been exploitable against high-powered passing attacks this season. The past three quarterbacks to beat Alabama who didn’t play for Auburn were Deshaun Watson, Trevor Lawrence and Joe Burrow. That is the level at which Fields must play, and he’s capable of doing it.

— Alabama’s receivers. Quarterback Mac Jones has a super-talented group to work with in the passing game. DeVonta Smith is on a two-game tear in which he torched Florida and Notre Dame. He had 22 catches for 314 yards and five TDs in those two games. Ohio State, which allows 271 passing yards per game, can’t lose Smith in the middle of the field like the Irish did. John Metchie’s 17.8 is another threat, and if Waddle — who averaged 22.3 yards per catch before suffering a leg injury against Tennessee on Oct. 24 — plays, then offensive coordinator Steve Sarkisian will have even more wrinkles to add to the playbook.

— Which big back goes large? Najee Harris and Trey Sermon are two big-time backs, and running the ball remains a priority for both teams. Will Sermon play the role of Ezekiel Elliott, who had 20 carries for 230 yards and two TDs in the last meeting between these teams? Sermon’s late-season surge has opened the playbook for the Buckeyes, and he’s up against an Alabama defense that allows 3.2 yards per carry. Ohio State also allows just 3.2 yards per carry, and Harris is a tough, physical runner. Which interior line wins on both sides? That will dictate the tempo of the game.

Ohio State’s red-zone offense was phenomenal against Clemson, and the challenge is to stay that way against the Crimson Tide. The Buckeyes scored TDs on 25 of 39 red-zone trips this year, and Alabama allowed 17 TDs on 34 red-zone trips by its opponents.

On the other side, Alabama scored TDs on 48 of 62 red-zone visits, and the Buckeyes allowed 15 TDs in 23 trips by their opponents.

This is a game in which TDs, not field goals, will win. Alabama has a small advantage here, but that can change in a game like this.

In that last meeting, Alabama was just 2-of-13 on third down. Jones will be more efficient than that, and the Crimson Tide will take a double-digit lead in the second quarter after Smith’s second TD. Ohio State won’t go away, however, and a Sermon TD before halftime will set up a thrilling second half. Both teams will trade TDs in a frantic fourth quarter. Which teams gets that crucial score (or stop) in crunch time? That’s the ultimate toss-up.