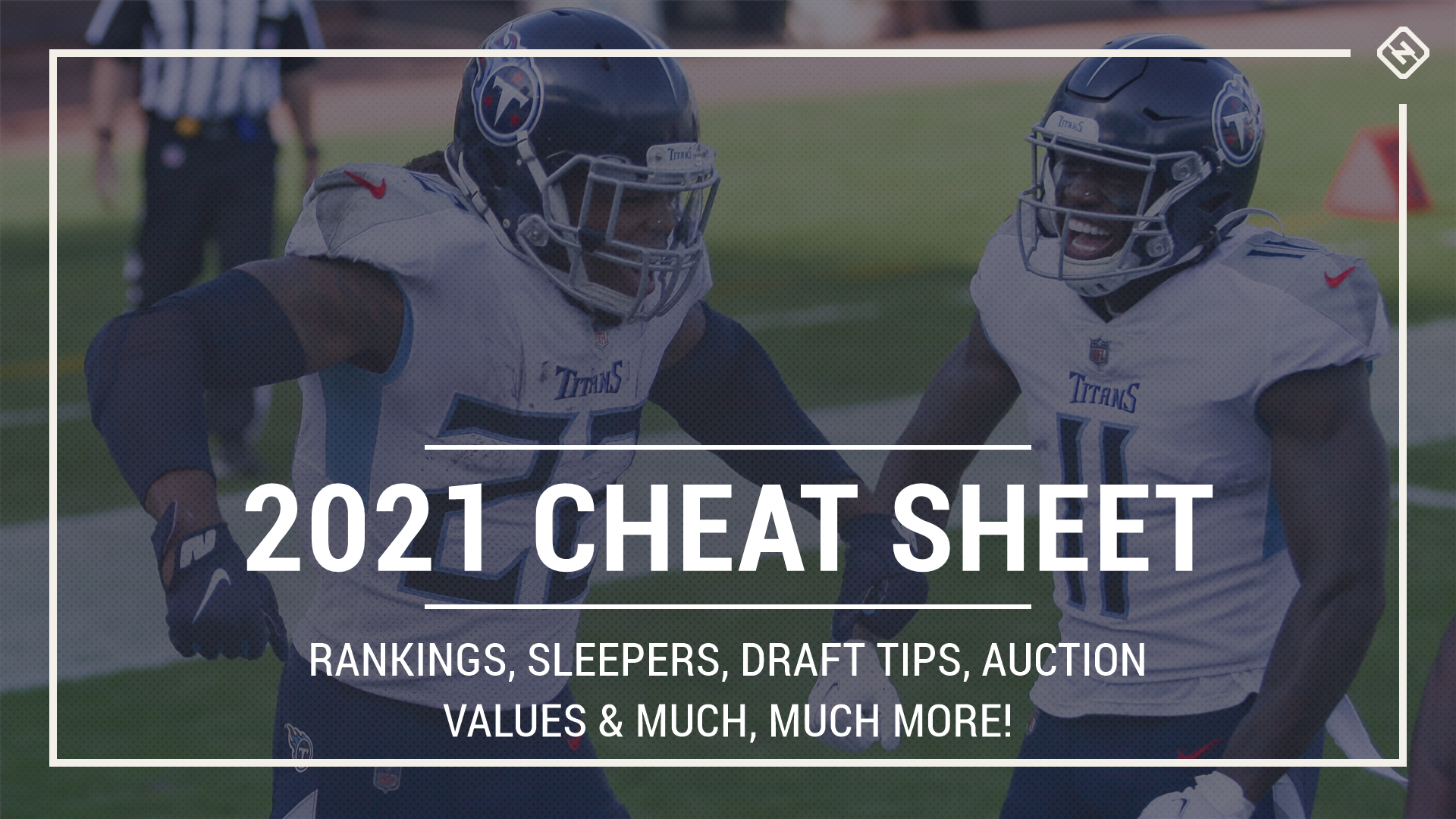 It doesn’t matter where you play (Yahoo, CBS, NFL.com, ESPN, DraftKings, FanDuel, Sleeper, etc.) or what your scoring format is — there’s something below that can help anyone. Yes, even the psychos who play in IDP leagues or are in Year 12 of a dynasty league with a taxi squad and dedicated slots for college players. (Those really exist.)

Week 1 kicks off on Thursday, Sept. 9 with the Cowboys and Buccaneers, and we’ll be updating the articles below and producing all sorts of new content throughout the preseason, so bookmark and check back often for the latest links (or follow SN Fantasy on Twitter). There’s plenty more to come as you get ready for your drafts!

Top 200: If you like lists with Blake Jarwin on them, then you definitely need to check out this one.

Quarterbacks: Why can’t all positions be this deep? (Click here for QB tiers)

Wide receivers: Which Bengals, Bucs, and Steelers WRs are ranked the highest on their respective teams? (Click here for WR tiers)

Defense/special teams: Where should you pick a defense in your draft? We answer that in addition to ranking them all. (Click here for D/ST tiers)

Kickers: What’s the most important article we write every year? Definitely not this one.

Superflex Top 200: You know that super-deep QB position we mentioned earlier? It doesn’t look quite as deep when everyone is gunning for three of them, huh?

IDP: The No. 8 DB makes no difference to at least 75 percent of you, but we’re here to serve the few, not just the many.

Rookies: Najee Harris, Ja’Marr Chase, and Kyle Pitts were easy choices for No. 1 at their respective positions, but things are very much up for debate after them.

Offensive lines: Sure, you’re not drafting any O-linemen, but don’t you just feel smarter knowing the Saints were fifth in yards before contact last year?

Comparing Yahoo and ESPN rankings: If you play on both sites, this is an invaluable tool for knowing which players you can wait for and which you’ll need to reach for.

Tight ends: The most exciting thing we can say about these rankings is Logan Thomas moves up slightly from our standard TE rankings. Cool, huh?

Superflex Top 200: This is the same as the standard top 200 superflex, only with the QBs a few spots lower. Honestly, you don’t really need to click on this, but we’d appreciate it if you did.

Quarterbacks: OK Daniel Jones, this is your last chance…

Running backs: The “Gus Bus” is leaving the station bound for Sleepertown, and whoever isn’t on it is going to feel like a real a-hole.

Wide receivers: We could really just put any receiver outside of the top 40 on this list, couldn’t we?

Tight ends: The term “Hog Rate” is included in the Anthony Firkser section. There’s no better way to sell the TE sleepers article than that.

Defense/special teams: Our list of the best early-season D/ST matchups is one of the most useful things we publish every year.

Draft-day steals: Before you ask — yes, you can find steals as early as the first round.

All-Sleeper Team: Actual first names of some of the guys on this list: Algiers, Laviska, Tuanigamanuolepola, and…Michael. We shouldn’t have put that one last.

Deep-Sleeper Team: Some — maybe most — of these guys won’t even play in Week 1. That will make it all the sweeter when they break out in Week 7, though.

Quarterbacks: We do our best to humble Tom Brady a bit with a “Tier 3” designation. Take that, pretty boy! (Click here for bonus breakdown of Mahomes vs. Allen vs. Murray)

Running backs: Does anyone still do the “Zero-RB” thing? If so, we even have a blueprint for them. (Click here for bonus breakdown of Henry vs. McCaffrey vs. Kamara vs. Cook)

Wide receivers: We have just 11 guys in Tiers 1 and 2, which is another way of saying you don’t want to be the last person in your league to draft a WR1. (Click here for bonus breakdown of Adams vs. Hill)

Tight ends: Tier 1 was probably the easiest call of any position, but figuring out the best way to approach TE on draft day remains difficult. (Click here for bonus breadown of Kelce vs. Waller vs. Kittle)

Defense/special teams: If we had to summarize this article in one word, it would be, “Wait.”

IDP guide: Ever wondered where to draft your first LB in an IDP draft? No? Well, some weirdos do, and this comprehensive IDP guide is for them.

Snake draft strategy: If you only listen to one of these tips, make it the last one.

Mock Draft Simulator: FantasyPros’ fully customizable mock draft simulator lets you practice any draft strategy in minutes (or hours if you have a lot of time to kill at work).

12-Team PPR Mock Draft: Having the No. 1 overall pick is awesome…for the first round. Then what, though? Check out our strategy.

Do Not Draft List: If any of these guys fall, they can go from potential busts to values really quickly, but in general, buyer beware.

Boom-or-Bust Team: Most owners wouldn’t be mad if this was their starting lineup on Week 1 — and that’s why we felt the need to highlight the risks of these players.

Running backs: Chris Carson at No. 14 is a good reminder that Chris Carson is a really good running back. Feels like people forget that sometimes, doesn’t it?

Wide receivers: Speaking of Seahawks, Tyler Lockett is awesome … for those six games a year when he’s awesome. The other 10 — err, 11? Well…

Tight ends: If a player is “touchdown reliant” but scores a touchdown most weeks, is he actually consistent or just lucky? We present Robert Tonyan…

Overall: From Christian McCaffrey to Wil Lutz, here’s who’s worth your auction dollars this year.

Quarterbacks: You want Josh Allen? Get ready to spend. You want Ben Roethlisberger? Apparently, the rest of your league will pay you to take him.

Running backs: You can get 6.5 Zack Moss’s for one Dalvin Cook.

Defense/special teams: Three D/STs are listed at $2, but we still don’t recommend paying more than $1 for this position.

Kickers: This list is useless, but we still published it, which shows we’re always willing to go the extra mile for you.

Auction draft strategy: A step-by-step guide on how to budget, nominate, and bid.

Best Ball draft strategy: Looking for a fantasy format where you get even more screwed by injuries? Welcome to best ball!

Dynasty/Keeper draft strategy/advice: Want to pretend you’re an NFL GM without having millions of fans hating you? Join a dynasty league, and check out these strategy tips to ensure you don’t wind up hating yourself.

Best team names: The rookies come through this year — especially Kyle Pitts — and we have plenty of COVID-related ideas if that’s your thing (whether you favor “Dakcine Mandates” or you’re not worried about the “Odellta Variant.”)

Player updates: How else are you going to know who added four pounds of muscle this offseason?

Available targets and touches: One player’s departure is another player’s potential gain. See who’s line for increased opportunities this year.

New coaches and play-callers: After checking out this list, you’ll probably think, “Wait, there’s another LaFleur and another Kubiak? When did that happen?”

Position battles: Saints QB, Jaguars starting RB, Saints WR1 — we cover all the fantasy-relevelant camp battles. Yes, even Gerald Everett vs. Will Dissly for that one person in a two-TE league.

Bye Week Strategies: Get a list of every team’s byes (they start later this year!) and figure out how to handle them.

Injury Predictor Tool: Draft Sharks gives SN Fantasy readers a sneak peek of its invaluable Injury Predictor index so you can avoid too many injury-prone risks on draft day.

Top 200: The top overall player might make even casual college football fans say, “Wait…who?” That’s how you know it’s going to be a wild year.

Quarterback: Why do all college QBs have cool names? Spencer Rattler, Grayson McCall, Emory Jones — I mean, these guys were destined to be college quarterbacks, right?

Running back: OK, forget what we said about college QBs having cool names. This list features guys named Deuce, Tank, Master, and Sincere. Come on, now…

Tight end: There’s no Kyle Pitts this year, but there are still some pretty good college TEs who can help later in drafts.

D/ST: Don’t be so shocked — some teams still play defense in college.

Kicker: We make fun of people who still have kicker as a position in NFL fantasy leagues, so imagine our thoughts on college fantasy leagues with a kicker slot.

Sleepers: Transfers, redshirts, players in position battles — don’t let these potential breakouts fall through the cracks during your draft.